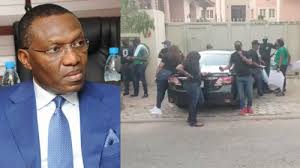 Staffers of Heritage Bank, Abuja in their numbers on Monday converged on the residence of Senator Andy Ubah in Abuja to appeal to him to pay back undisclosed amount of loans he had allegedly owed the bank “over a couple of years.”

Many are already throwing jabs at the Bank.. Saying :

“They are not serious , was there no process before loan was given?. No collateral ?
They are getting what they bargained for…

Another commented said : “This only means that your bank is corrupt and has no now clue on how to run a bank ?
I mean how do you give such huge loan without protection and collateral?

“This is a very good lessons to all bank. Once a serious man like me saving money with them for years approach the bank for loan, they will be asking for 55% interest. And be given the politicians loan with almost zero interest… Almighty God will continue to disgrace those banks…”

A one-minute video clip circulated on WhatsApp showed the distraught bank workers, some of them with placards, milling around the frontage of the senator’s residence.

Unconfirmed reports say that the Managing Director of the bank, Ifie Sekibo, authorized the “invasion” of Ubah’s residence as a desperate move to get the politician to repay his debts.

This was on a day Sekibo was also at the Central Bank of Nigeria in Abuja for reasons that could not be established as at press time.

Senator Andy Ubah has been owing the bank for a couple of years now, and we are here for a peaceful meeting with him, to ask him to kindly repay those loans, because those are depositors’ funds.

“And those monies, if they are not repaid, he will throw the number of people you see here, with their families, out of work; and we know the situation of economy now.

“We are here to appeal to him, the distinguished senator, to kindly pay this money so that these people will not lose their jobs; and of course, the bank becomes a growing concern.”

Senator Ubah is nursing the ambition to contest the governorship of his state, Anambra, later this year.

It should also be noted that there have been allegations that the National Assembly has been unwilling to institute probes into loans in the banking sector because some top members are indebted.