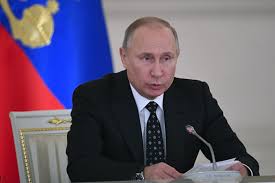 Russia on Wednesday said it fired warning shots at a British Navy destroyer in the Black Sea after it violated the country’s territorial waters, while the UK denied that shots had been fired.

Incidents involving Western aircraft or ships are not uncommon at Russia’s borders, especially during heightened tensions with Washington, Brussels and London, but rarely result in open fire.

The HMS Defender “was given a preliminary warning that weapons would be used if the state borders of the Russian Federation were violated. It did not react to the warning,” the Russian defence ministry said, as quoted by the Interfax news agency.

The defence ministry added that “a border patrol ship fired warning shots” and a Su-24 aircraft dropped four bombs along the destroyer’s path. It said that the ship then left Russian waters.

But the UK’s defence ministry swiftly denied that the incident had happened at all.

“No warning shots have been fired at HMS Defender. The Royal Navy ship is conducting innocent passage through Ukrainian territorial waters in accordance with international law,” the ministry said.

According to the Russian defence ministry, the incident took place off the coast of Cape Fiolent on Crimea, which Russia annexed from Ukraine in 2014, also claiming the peninsula’s coastal waters.

The Royal Navy said earlier in June that the HMS Defender had “peeled away” from its strike group conducting NATO operations in the Mediterranean to carry out “her own set of missions” in the Black Sea.

The US periodically sends warships to the region in a show of support for Ukraine, often drawing protests from Russia.

At the height of tensions over Ukraine this spring after Russia built up troops on its border and in Crimea, Moscow stepped up military exercises in the Black Sea and Washington warned it would send two warships.

Those ships were never dispatched, as Russia pulled back its forces and the tensions eased.

At the time, Russia also threatened to close parts of the Black Sea, which would have affected access to Ukrainian ports in the Sea of Azov that is connected to the Black Sea through the Kerch Strait on the eastern tip of Crimea.

Ukraine had been free to navigate the Kerch Strait — of crucial importance to Kiev for exporting grain and steel — along with Russia until 2014, when Moscow claimed full control of the waterway after annexing Crimea.

“By international law, of course, the waters off Crimea are not Russian, as the annexation is not recognised,” Mark Galeotti, a professor of Russian studies at University College London, tweeted Wednesday.

“Continuing to pass those waters — without being too provocative — is a crucial way of reaffirming law over land and sea grab.”

The most serious recent tensions over the waters were in November 2018, when Russian forces boarded and took control of the ships as they headed through the Kerch Strait.

Russia captured 24 Ukrainian sailors as part of the seizure, returning them to Ukraine as part of a prisoner swap in September 2019.