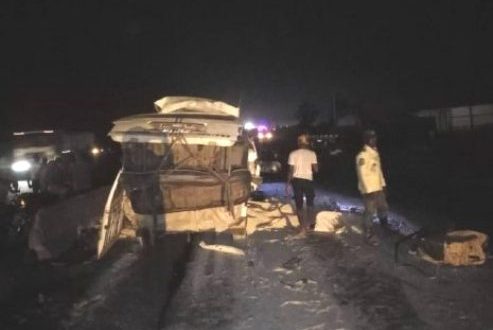 A pregnant woman and two other men were confirmed dead in a multiple accidents .

It happened around the Danco axis on the Lagos-Ibadan Highway.

The spokesperson of the Traffic Compliance and Enforcement Corps (TRACE), Mr. Babatunde Akinbiyi, confirmed the development .

The accident occurred around 4:30 am, yesterday.

Akinbiyi said that the driver of the Mazda bus carrying ‘garri’ lost control due to speeding and rammed into an unknown runaway truck from the rear, which led to multiple hits by other vehicles.

“Among the three casualties who died in the unfortunate crash are two men who were occupants of the Mazda bus loaded with ‘garri’, while the pregnant woman was in the Mazda bus carrying tomatoes,’’

The deceased were evacuated by the officials of the Federal Road Safety Corps (FRSC) to Idera Hospital’s private morgue in Sagamu.

All the vehicles involved in the accident had been towed to the Police Divisional Command in Sagamu.