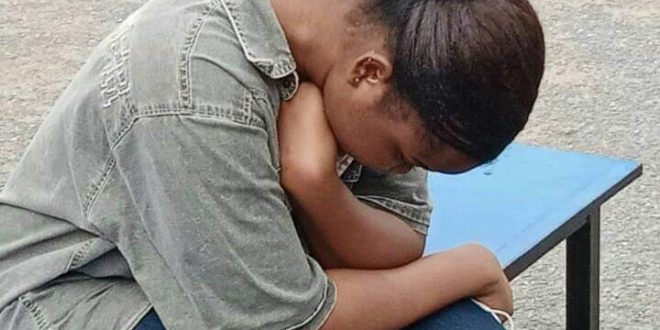 The suspect and her father were arrested at their residence, No. 57 Akinwunmi Street, Alagomeji, Yaba, on Wednesday.

The father was arrested for resisting Chidinma’s arrest and for becoming violent with policemen, who went to apprehend her.

YOU NEWS learnt that the man did not believe that his daughter committed any crime until she confessed on Thursday, adding that he was being detained at the State Criminal Investigation and Intelligence Department, Panti, Yaba.

Chidinma stays with her dad. Her dad and mom don’t live together.

Her father was arrested on Wednesday, because he resisted his daughter’s arrest. He never believed that his daughter committed any crime until Thursday. He is at Panti as we speak, but he was not paraded today (Thursday).

Chidinma, a 300-level student in the Department of Mass Communication, University of Lagos, confessed to stabbing Ataga to death while being paraded at the state police command headquarters, Ikeja

Previous Police narrate how Chidinma was tracked, traced and arrested
Next Revealed : Why Buhari won’t stay more than 21 days on medical trip