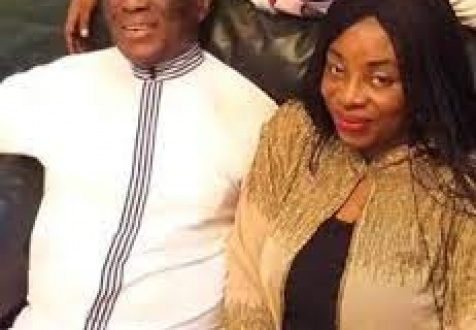 Pa Joe Ayomike and his wife, Chi-Chi Ayomike have been discovered dead, days after breathing their last, in their private, GRA home

Decomposing bodies of the couple locked in a room clearly point to the fact that they were likely killed, assassinated

The Ologbotsere of Warri Kingdom, Chief Ayirimi Emami, has therefore called on the Inspector-General of Police, Usman Alkali Baba, and other relevant security agencies to immediately commence thorough investigation with a view to unmasking the cause(s) of the controversial death of Pa Joe Ayomike and his wife, Chi-Chi Ayomike.

It was gathered that Joe Ayomike and his wife were on Monday discovered dead with their corpses decomposing in their residence at GRA, beside Nana College, Warri in Delta State.

It was still sketchy as at press time how the couple died, but their decomposing remains were found Monday in their Warri, Delta State residence.

Sources disclosed that the couple may have been killed by suspected invaders who reportedly shot and macheted them to death before fleecing the house, which was then locked.

According to reports, the fleeing suspects reportedly carted away valuables, including two exotic cars belonging to the late couple.

The source said that having murdered the classical music lover and his wife, the suspected assassins allegedly locked the victims in one of their rooms in the compound and fled the items.

The deceased were reportedly found on Monday following a foul smell in the neighbourhood, a development which prompted residents and police to break into the apartment where the couple were discovered dead and their corpses decomposing.

The spokesman of the Delta State Police Command, DSP Edafe Bright, who confirmed the incident, said no arrest has been made so far.