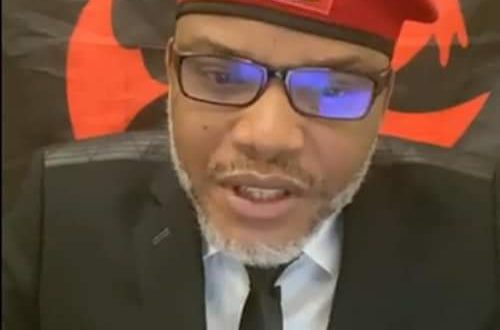 How Nnamdi Kanu was actually ‘captured’ in Ethiopia

IPOB leader who jumped bail in 2017 was not arrested in his UK base but in the African country, Ethiopia.

According to an exclusive report the process started when in the first week of June, when “Malami, according our authoritative sources, had written a letter, through the Ministry of Foreign Affairs, to the Government of Ethiopia seeking its cooperation to help track down Kanu in the country.”

“The government informed the Ethiopian Government that Kanu was on its soil and requested its cooperation with the INTEPOL,” the report said.

It added that “Kanu was thereafter intercepted in Ethiopia by joint security operatives of the government and INTEPOL and extradited to Nigeria over the weekend.”

The IPOB Leader is facing multiple charges in connection with his separatist campaign that has turned the Igbo heartland in the South-East into a war zone, with rampant reports of rights abuses by Nigerian troops hunting IPOB members accused of perpetrating violence- but which the group has consistently denied.