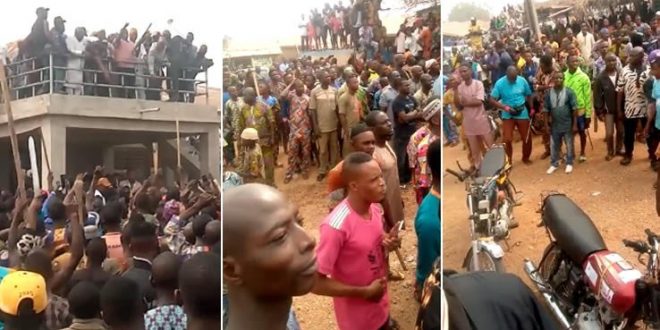 One of the earliest and most enduring lessons I learnt in journalism is that someone’s rebel is another’s freedom fighter.

To the government of Muhammadu Buhari, SUNDAY IGBOHO, the Yoruba nation agitator, is an outlaw but to many #Yoruba people, Sunday Igboho represents a movement to liberate them from terrorists, killer herdsmen, bandits and kidnappers who wanted to grab their land, kill their people, extort money from their kindred and generally make life unbearable.

Professor Wole Soyinka captured it most succinctly in a TV interview. Who knew Sunday Igboho before the government failed spectacularly to provide security for the people? Except for the political gladiators who engaged him for their business, the overwhelming majority of Yoruba people, including yours truly, never even heard of him before now.

Today, the profile of Sunday Igboho has changed. He is the bold freedom fighter who told killer herdsmen who were terrorising the people of Oke Ogun in OYO State that enough is enough. He is the courageous man who said no bandit would be allowed to turn the forests in the #Southwest to killer zones where they could freely kidnap the people and extort money from them. He is the one who gave hope to farmers in the Southwest that if the government failed in its constitutional duty to protect you, they would be there for them.

I watched a video of when Sunday Igboho went to #Akure recently. People trooped out in their thousands and comments like “ose, ajobi a gbe o (thank you, our forebears will bless you) were graciously expressed mostly by elderly people as his long convoy passed them by.

That is the Sunday Igboho whose house was invaded in the dead of the night by the DSS. Like the #Afenifere and many other people have stated, the FG has mismanaged the Sunday Igboho issue. Afenifere said tmanner of the invasion of his house was a revisit to the dark days of the Abacha jackboot era where dissenting voices were permanently silenced. The government has shown more determination in crushing Igboho than in wiping out bandits.

Until recently, the killer Fulani herdsmen (of course there are decent Fulani herdsmen who are going about their duties legitimately) have been treated with kid gloves. Even when Southern Governors banned open #grazing, a decision that would help to reduce banditry to the barest minimum, President Buhari, Abubakar Malami, SAN and others opted for open grazing, which they knew was the root cause of the escalation of tension in the country. Which government would not gladly embrace a solution that would guarantee peace?

The leadership of Miyetti Allah Nigeria made many provocative statements but nothing happened to them. Government did not even warn them to stop making such insidious remarks. A community in Oke Ogun was invaded recently, the government did not say a word, making many to wonder if government really cares about those lost Yoruba lives. We were promised Boko Haram would become history within 3 months of the Buhari administration, the terrorist organisation is still going strong 6 years after. If the government willed, it could take care of Boko Haram within a few months.

Now, #DSS told Nigerians they found guns in Igboho’s house, how credible is that piece of information? Igboho has already controverted the claim, saying the security operatives destroyed the surveillance cameras in his house to plant those ammunition. Would it not have been better if the security operatives had gone there in broad daylight with a search warrant and possibly with the media whose reports would have helped the world to know the truth? What was the justification for destroying the vehicles in #Igboho’s compound?

This government should listen to Afenifere and other voices of wisdom. They should do their job efficiently and legitimately. The perception of many is that the government went after Igboho because he is fast becoming the rallying figure in the struggle to liberate the people of Southwest. True, no government will tolerate any activity that will make the nation ungovernable, let government fight, with all its might, terrorists, bandits, kidnappers and all the criminal elements who have declared war on the nation through their nefarious activities.

On his part, Igboho should also ensure he fights this cause without any recourse to violence. He should work collaboratively with other Yoruba leaders who are fighting the liberation battle peacefully with tact.