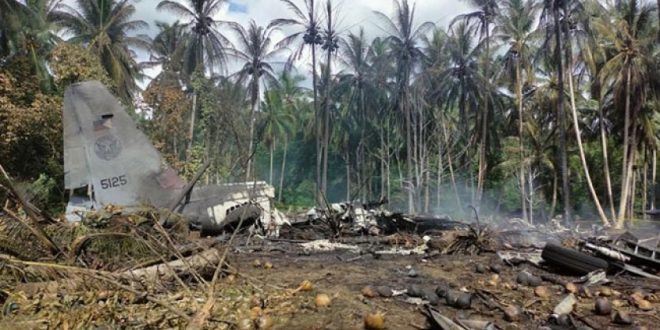 At least 29 people were killed and 50 injured Sunday when a Philippine military aircraft carrying troops crashed and burst into flames after missing the runway in the country’s south, officials said.

Another 17 on board the C-130 Hercules transport plane when it crashed while trying to land on Jolo island in Sulu province are still missing, Major General William Gonzales said in a statement.

“This is a sad day but we have to remain hopeful,” he said.

Photos taken by local media outlet Pondohan TV and posted on their Facebook page showed the wrecked body of the plane engulfed in flames. A plume of thick black smoke rose above houses located near the crash site.

Armed Forces Chief General Cirilito Sobejana said the aircraft had been carrying troops from Cagayan de Oro on the southern island of Mindanao when it “missed the runway” as it tried to land on Jolo.

The plane tried to “regain power but didn’t make it,” he told local media, describing the accident as “very unfortunate”.

“Responders are at the site now, we are praying we can save more lives,” Sobejana told AFP.

Sobejana said the 40 rescued from the wreckage were being treated at the nearby 11th Infantry Division hospital.

Air Force spokesman Lieutenant Colonel Maynard Mariano said the cause of the crash would be investigated.

“We are on rescue mode right now,” Mariano told AFP.

It was being treated as an accident rather than an attack, Armed Forces spokesman Major General Edgard Arevalo told DZBB radio.