Find the latest bookmaker offers available across all uk gambling sites www.bets.zone Read the reviews and compare sites to quickly discover the perfect account for you.
Home » Entertainment » Celebrity » 36-yr-old Bauchi carpenter celebrates his “achievement” as his 4 wives give birth within 3 wks 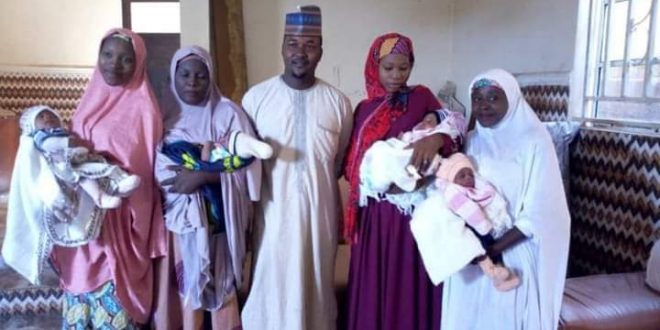 A 36-year-old carpenter from Zango ward, Bauchi State, Nura Walwala Magaji, is over the moon after his four wives gave birth within three weeks, making the total number of his children thirteen, 10 boys and 3 girls.

Two among his four wives gave birth within 48 hours while the interval between the third delivery and the fourth was 21 days.

Speaking exclusively with LEADERSHIP, the proud father of 13 thanked Allah for blessing him with four additional children, adding that his childhood dream is to father at least 40 children.

“I thank God for this precious gifts because it is not everyone who desires to have children are blessed with them. While some have mixed genders, others are given boys exclusively. Babies are a gift from Allah and I am happy that my four wives gave birth to three bouncing boys and a girl within just three weeks,” he said.

Although managing a large family isn’t easy, Nura insisted that with earnings from his carpentry works and proceeds from the petty trade his wives are engaged in, he would comfortably carter for his children.

“I am aware that caring for kids can feel like draining work. If we don’t find a proper balance between caretaking of our family and investing in our own self-care it can be easy to miss out on the daily joys of a childhood unfolding before your eyes, family-life, and the legacy that you have the honour of passing to your children.”

Nura disclosed that the naming ceremony of the children was held with friends and family members in attendance.

We organised a sizable naming ceremony within our means where we ate and drank with family members, friends and well-wishers. Only one of them delivered at home, the other three delivered in the hospital”, he explained.

The carpenter said he was not bothered about what people around his neighbourhood were saying because polygamy runs in his blood.

“Polygamy runs in my blood. In fact, we inherited it from both our maternal and paternal grandparents. My mother’s father married four wives , likewise my dad’s father . Yes, it might sound funny but am so proud of this achievement. Growing up as a child, I used to pray to Allah to bless me with 40 children and people laughed at me,” he said.

You know everybody has their idealogy and you cannot force a particular ideology on someone. Haven said this, bearing family responsibility is not solely in our hands as husbands , rather, it is in the hands of our Creator. Look, Allah commanded us to start by marrying two wives, then proceed to three wives , then four wives and He said if you cannot be just among them, go for one wife”, Nura added