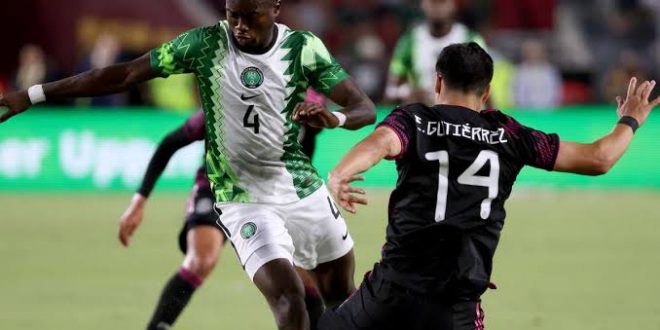 Hector Herrera put the Mexicans in front in the 2nd minute from the first cornerkick of the match while Rogelio Funes Mori made it 2-0 in the fourth minute, Udo kept him on-side as the referee awarded the goal despite calls for an offside by the Nigerians.

Luis Rodriguez was shown a yellow card in the 14th minute for a foul on Anayo Iwuala. He halted the Nigerian who was headed for a fast counter attack.

Jesus Corona almost made it 3-0 in the 25th minute but his volley from an accurate Hirving Lozano’s cross flew over the bar.

Lozano saw his shot saved by Nwabali in the 29th minute and went close once again in the 30th minute but his shot went wide this time.

The Eagles failed to get a shot on or off target in the first 45 minutes as the Mexicans controlled the tempo of the game.

Eagles defender, Imo Udo was booked in the 53d minute for a foul on Mexican forward Lozano after a dangerous tackle on the right flank but Nwabali make a smart save from the resulting free kick after skipper Herrera jumped the highest to head the ball.

The Super Eagles were desperate to put an end to their seven-game winless run in friendly matches against Mexico.

The Sunday match is the sixth confrontation between the senior teams of both countries, four of which have ended in draws.

Previous Messi scores one goal, creates two others as Argentina beat Ecuador 3-0
Next Bezos resigns as Amazon CEO, travels to space next mth, hands over to Andy Jassy