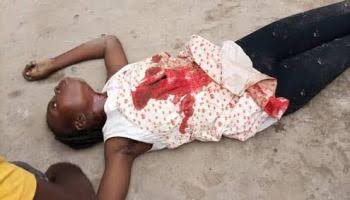 The mother of the 14-year-old girl killed allegedly by a stray bullet during the Yoruba Nation rally in Lagos on Saturday has expressed sorrow on receiving the news of her daughter’s death.

Agitators for Yoruba self-determination had gathered at the Gani Fawehinmi Park in Ojota amid the presence of armed policemen and soldiers.

This was after the Lagos State Commissioner of Police, CP Hakeen Odumosu, had addressed newsmen at the venue, where he announced that no rally is allowed in the state.

However, his announcement was defied by the agitators who flaunted their banners and chanted all sorts of slogans to express their determination towards the breakaway of the Yoruba group from Nigeria.

This displeased the security operatives at the venue who fired teargas canisters and used water cannons to disperse the crowd.

This didn’t deter the agitators who returned to their converging point and carried on from where they left off.

The next action from the security operatives had everyone at the rally scampering to safety as gunshots sounded from different directions.

When the situation became a bit calm, a young girl who was displaying drinks at a shop close by was seen lying in a pool of blood.

She was reported to have been hit by a stray bullet when security operatives were dispersing the crowd at the rally.

Reacting, the Lagos State Police Command issued a statement through the Public Relations Officer, Olamuyiwa Adejobi, denying that the girl died as a result of the actions of security operatives.

Adejobi said, “The said corpse was found wrapped and abandoned at a distance, far from Ojota venue of the rally, behind MRS Filling Station, inward Maryland, on the other side of the venue, with dried blood stains suggesting that the corpse is not fresh.

“After a close look at the corpse, a wound suspectedly sustained from a sharp object was seen on it.

“The news is false and mischievous. The Command, therefore, urges the general public to disregard the news and go about their lawful normal daily activities while investigation to unravel the incident will commence immediately.”

However, the umbrella body of Yoruba self-determination groups, Ilana Oodua, through a statement by its Media Communications Secretary, Mr. Maxwell Adeleye, faulted the police for the young girl’s death.