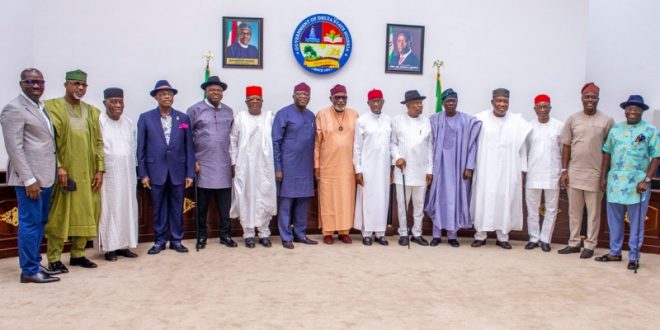 President Muhammadu Buhari’s order on the recovery of grazing routes for herders will top the agenda of today’s meeting of 17 southern governors.

It was gathered that the meeting, which would hold eight weeks after the governors met in Asaba, the Delta State capital, would further assess decisions taken in Asaba on the open grazing ban, restructuring, fiscal federalism and the call for state police.

The governors would be hosted by Lagos State Governor, Babajide Sanwo-Olu, at the meeting which would start by 10am today (Monday).

Recall that the governors in a communiqué issued at the end of the meeting in Asaba, banned open grazing as part of moves to address killings and kidnapping by herdsmen.

But a few days after the meeting, the Presidency faulted the ban on open grazing. The Presidential spokesman, Garba Shehu, had in a statement, stated, . “It is equally true that their (governors’) announcement is of questionable legality, given the constitutional right of all Nigerians to enjoy the same rights and freedoms within every one of our 36 states (and FCT)-regardless of the state of their birth or residence.”

Also, the Attorney General of the Federation and Minister of Justice, Abubakar Malami, SAN, slammed the southern governors for banning open grazing.

According to the AGF, open grazing ban is the same thing as Northern governors banning spare parts trading in their own region considering the fact that southerners comprise a majority of spare parts traders in the North.

The President during a recorded television interview in June also backed Malami’s position, adding that he had directed that grazing routes be recovered.

When asked if he agreed with the AGF’s position, Buhari had responded, “You want me to contradict my attorney-general?”

Explaining further, he said, “What I did was to ask him to go and dig the gazette of the First Republic when people were obeying laws. There were cattle routes and grazing areas. Cattle routes were for when they (herdsmen) are moving up country, north to south or east to west, they had to go through there.