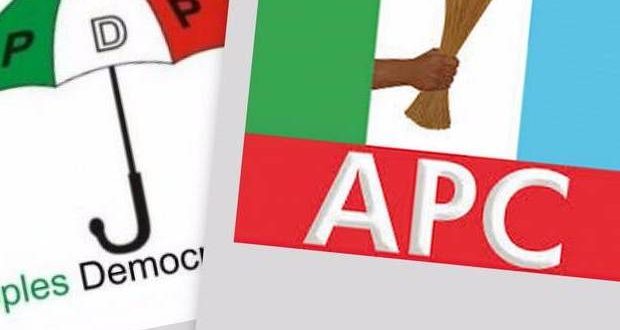 Opinion : Will PDP Survive This Hurricane of Defections ?

The ruling All Progressives Congress (APC) seems to have something that is not in the public glare, which has continued to make it, like a magnet, attract in droves members of the opposition to its ranks like honey would attract bees. One thing for sure; it is certainly not owing to the performance of the party in power. If anything, we have regressed at such a rapid pace that if we continue at this tempo, 2023 may just be too long in coming.

Nigerians are dying, cost of living is sky-bound, inflation is now a sprint not a marathon, life is becoming a nightmare for many. Only God can explain how we have stayed together as we live everyday as it comes, wondering if we would make it to the next day. The nation has been driven roughshod to the precipice and fringes as though it would be smashed in smithereens. Easily, the greatest existential threat to the nation’s unity is insecurity across the country.

Yet, in the midst of all these, the opposition parties still find the floundering ruling party too attractive to resist. What is the allure?

Last Tuesday, the Governor of Zamfara State, Bello Matawalle, became the latest state chief executive to defect to the ruling party as he formally joined the APC after months of speculation and denial.

Mr. Matawalle announced his defection late evening at the Gusau Trade Fair Complex at an event attended by APC governors, ministers and the Secretary to the Government of the Federation (SGF), Boss Mustapha.

Mr. Matawalle was declared governor on May 24, 2019 after the Supreme Court disqualified all the APC candidates in the state in the general election of that year over the failure of the party to conduct valid primaries.

The apex court ordered the Independent National Electoral Commission to cancel the votes secured by the APC in all the elections and decide the new winners from the remaining valid votes.

APC had swept the poll in the state by winning the presidential, governorship and all the federal and state legislative seats while PDP candidates trailed in the second position.

After the conclusion of the two governorship elections in Edo and Ondo states in 2020, the ruling APC was in control of 20 states while the PDP was in charge of 15 states. The remaining state was and is still controlled by the All Progressives Grand Alliance (APGA). With the latest defection of Governor Matawalle, the ruling APC is now controlling 22 states while the PDP is in charge of 13. The remaining one state is controlled by APGA.

Similarly, the PDP senators have been reduced to 38 from 44 they were in June 2019, during the inauguration of the 9th Senate, while the APC senators have increased to 70. Strangely, the only other senator in the National Assembly not from the leading parties, Senator Ifeanyi Ubah (Anambra South) of the Young Progressives Party (YPP) still remains even while it had been expected earlier that he would have joined the APC shortly after the inauguration of the Senate given his open fraternization with the ruling party’s leadership of the senate.

Receiving Matawalle, President Muhammadu Buhari, who was represented by Mustapha, said the governor decided to embrace the APC after realising that the ruling party “is becoming more popular because of its impressive performance record and commitment to good governance.”

He said, “I’m proud of your timely and wise decision to join the governing party and our doors are wide open to other politicians who believe in our vision to rebuild Nigeria.

“Your voluntary decision to join our party confirms the fact that our agenda for good governance is the only reason why Nigerians are getting attracted to the APC because the other alternative didn’t work.”

Recall that Governor Yahaya Bello of Kogi State had in June last year predicted that 10 PDP governors were on their way to the APC, and many waved it off as wishful thinking, but it’s still about two years from 2023 and so far Bello is already sounding like a prophet.

Expectedly, the PDP has been screaming blue murder. The chairman of the party, Uche Secondus, last Tuesday, described the defection of some of the party’s governors as an effort by the ruling APC to rig the 2023 general elections.

Meanwhile, a genuinely concerned member of the APC, Professor Itse Sagay (SAN), who is also Chairman of the Presidential Advisory Committee Against Corruption (PACAC), expressed disappointment at the disposition of the ruling party to receive every Tom, Dick and Harry into the party.

According to him, PDP governors who are defecting to the APC are highly unprincipled people and opportunists who want to remain relevant at all cost.

Speaking exclusively with Daily Independent, Sagay, who said the actions of the APC leadership has greatly embarrassed him as one of its members, also blasted the national caretaker committee chairman of the party, Governor Mai Mala Buni of Yobe State, who, he said, has failed to carry out his role to organise a national convention for the APC.

“I am extremely dismayed and troubled by that. I am also very displeased with the APC for accepting all these people. These are opportunists who want to use the chance of joining APC to continue to remain in power and remain relevant.”

About two years ago, a former governor from the south west had hinted, during an interview, that many of these governors and ex-governors whose past may not be too tidy would be coerced into decamping to the ruling party. That same ex-governor has since decamped to the APC.

While this development has turned out a good fortune for the ruling party, for the opposition this calls for worry. What would be left of this democracy without opposition? The APC might as well tell it to the marines that this is an indication of its performance or acceptance by the people, but truth is that it’s unfortunately not the case. It is pure and simply about selfish interest as Prof Sagay has said and it calls for real worry.

Recall that some years ago, the former APC chairman, Comrade Adams Oshiomhole, in his usual devil-may-care mannerism, had said that anyone who joined APC would have his/her sins forgiven. Perhaps, Nnamdi Kanu and Sunday Igboho can consider this.

If that is the bait the party is deploying to attract opposition politicians, I do not know, but one thing for sure is that politicians are simply seeking greener pastures as horse-trading and political maneuvering towards 2023 begins.

If the APC and the president pay the same attention and promptness it gives to receiving decamping political office seekers to the myriad of problems confronting the nation, they would have done better and Nigeria would be better for it.

It’s not enough to convert the president’s office to a reception venue while the nation risks becoming a one-party state and with no indication of reforming the electoral process where perhaps an independent candidate can contest election. What this portends is that a behemoth APC will literally swallow all the other parties and deny Nigerians the benefits of real opposition at a time when all other organs of government have since been muzzled in a democracy that is at best stuttering.

APC leaders must realize that this is all about the government in power and that if the table turns tomorrow, these scenarios would repeat themselves. The way things appear to me, it is like the APC is more interested in winning over political office holders and not too keen on what the real voters feel about their performance.