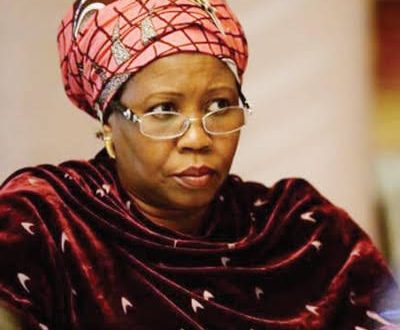 The Minister of State for Industry, Trade and Investment, Amb. Mariam Katagum, slumped at an official event in Bauchi State on Monday.

Katagum, who was in Bauchi to launch an empowerment programme on Monday at the Sani Mallam Shopping plaza located along the Ahmadu Bello Way, Bauchi, was said to have suddenly collapsed as she tried to deliver her speech.

She was immediately rushed by officials to the Trauma Centre of the Abubakar Tafawa Balewa University Teaching Hospital for medical attention.

The minister, who hails from Bauchi State, had been in the state since Saturday and featured in a live programme on Globe FM radio on Sunday and had other personal engagements in the state.

Sources said that when Katagum got to the venue of the event, she looked withdrawn and touched her head occasionally as the programme went on.

Another eyewitness said that the minister slumped as she stood up to deliver her address and inaugurate the programme, saying, “She (Katagum) just held her head and went down flat. Her aides and other officials quickly intervened and rushed her to the hospital.”

Previous Fire outbreak in T.B. Joshua’s Synagogue Church, as burial rite begins
Next Gunmen hit Bizman’s car, to get him out, then shot him dead