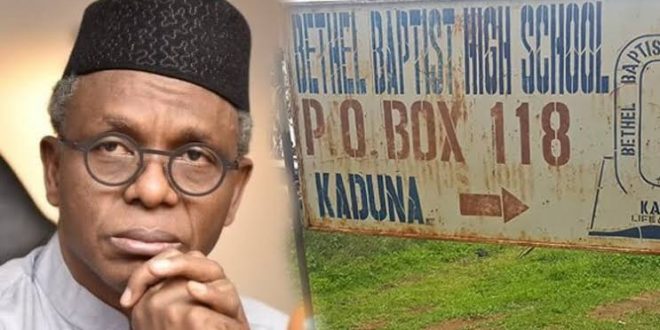 The bandits have said the parents must supply 30 bags of rice, 20 bags of beans and 10 kegs of palm oil.

Recall that the bandits had at 1am on Monday invaded the school and kidnapped 121 students, who are mostly in Senior Secondary School 2 and 3.

The parents and management of the Bethel Baptist High School, Maraban Rido, Kaduna State, have raised money to buy foodstuffs being demanded by abductors of the 121 students of the school.

The bandits contacted the school management on Wednesday evening and specified the quantity of foodstuffs they wanted.

Madugu said he received a call at 7.30am on Tuesday shortly after the students had been abducted and was assured of their safety.

He further stated that the bandits said authorities had blocked their access to food and therefore demanded that the school and the parents make food items available.

The Vice-Principal of the school, Wakili Madugu said
the school did not have all the items demanded because it had exhausted almost all their foodstuffs ahead of the school’s closure this week.

But the father of one of the abducted students said the school had appealed to parents to donate money that would be used to buy the foodstuffs.

On Thursday evening, a source in the school said the foodstuffs had been bought and that the telephone call from the bandits was being awaited.

The source stated, “We are waiting for their (bandits) call now to know where they want us to deliver the foodstuffs to them.

“We (management) have bought the rice and other foodstuffs (food items). We are waiting for the call from them (bandits) for direction for where we will meet. We have been waiting for their calls since morning. We have bought all the foodstuffs and all is set. The school didn’t make it mandatory for parents to pay, but some of them volunteered to give for the purchase of the foodstuffs.”

Meanwhile, all parents would dress in black attire today (Friday) for a special prayer session that will last for four hours.

“There will be special prayers tomorrow and all of parents are going to wear black attires to last for four hours,” he said.
[7/9, 04:01] Afolabi Odeyemi: Deadly Delta COVID-19 Variant In Nigeria

Nigeria has confirmed the detection of the Delta COVID-19 variant in the West African country.

“The Nigeria Centre for Disease Control (NCDC) has detected a confirmed case with the SARS-CoV-2 Delta variant, also known as lineage B.1.617.2,” the health agency said in a statement on Thursday night.

The variant was detected in a traveler to Nigeria, following the routine travel test required of all international travelers and genomic sequencing at the NCDC National Reference Laboratory, Abuja.”

The NCDC, however, assured Nigerians that the federal government has put measures in place to combat the disease, asking them to adhere to the recommended safety protocols.

“Proven public health and social measures such as physical distancing, frequent
handwashing, and proper use of face masks, prevent infections and save lives,” it added.