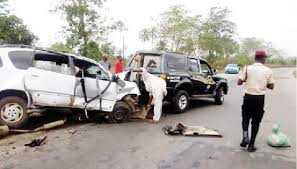 Five persons lost their lives and four others sustained injuries on Thursday in an accident involving a Toyota Hiace bus and a Scania truck at Ayetoro community, Ogun State end of the Lagos-Ibadan Expressway.

The Ogun State Sector Commander of the Federal Road Safety Corps, Ahmed Umar, who confirmed the incident on Thursday, said the Toyota Hiace was marked SPR 373 XA, while the truck had the number plate, GGE 468 XX.

Umar noted that the crash was caused by speeding and dangerous driving, adding that the bus driver rammed into the moving truck.

According to him, the crash, which occurred around 9.20am, claimed five lives, while four people were injured.

The FRSC boss said the injured victims were taken to the Idera Hospital, Sagamu, for treatment, while the deceased persons were deposited in the mortuary of the same hospital.

Umar said the crash was avoidable and advised motorists to avoid speeding and dangerous driving, especially during the rainy season, and also obey traffic rules and regulations.