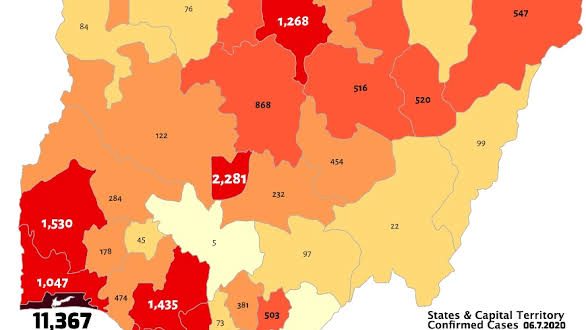 Nigeria is gradually approaching the third wave of COVID-19 with the steady rise in positive cases of the virus in the last one week.

Fear that the third wave might be deadlier than the two previous ones was heightened by the fact that the country recorded Delta variant of the virus last week when most states had exhausted their vaccine doses.

The Delta variant has been confirmed in 22 African countries and has been found to spread 225 per cent faster than the original virus.

No fewer than 5,600 people across Africa died from COVID-19 in the first week of July.

Lagos State, which was the epicentre of the virus in Nigeria during the first and the second waves, on Sunday said the bed occupancy in its isolation centres had increased from one per cent to six per cent.

The Lagos State Governor, Babajide Sanwo-Olu, in a statement on Sunday, said only one per cent of the states’ residents had received COVID-19 vaccines, adding that the state was targeting 60 per cent for herd immunity.

He also lamented that between May 8 and 7 July, 2021, 18 per cent (9,057) of 50,322 “passengers of interest” who arrived in Lagos via the Murtala Mohammed Airport could not be reached for mandatory isolation.

The governor said these as the Nigeria Centre For Disease Control on admitted steady rise in COVID-19 cases in the country in the last one week.

The Spokesperson for the Director General of the NCDC, Emeka Oguano, in an interview stated that higher figures recently recorded were not due to backlog of cases.

Until last week, many Nigerians had heaved a sigh of relief as the country was recording an average of less than 40 cases daily.

But the daily COVID-19 cases shot up to an average of 105 cases last week as the Federal Government alerted Nigerians that the country had recorded its first case of the Delta variant of coronavirus.

The World Health Organisation has said Delta is the most transmissible variant of COVID-19.

According to the global body, the variant is responsible for the spike in about 98 countries across the world where it has been reported.

No fewer than 737 new COVID-18 cases were recorded in the country between July 4 and 10, according to the NCDC.

The Ogun State Commissioner for Health, Dr Tomi Coker, said the state had exhausted the vaccine doses allocated to it by the Federal Government.

Coker said the state got additional 10,000 vaccines and had also consumed them. Coker disclosed that July 9 was the expiry date of the vaccine the state received.

She said, “The expiry date was 9th of July. We have consumed all vaccine doses allocated to the state and addition of 10,000 doses.

“The Federal Government policy is that all vaccines will be procured centrally and distributed to states. So along with all other states, we await the next batch of vaccines from the NCDC.”

Bed occupancy in isolation centres increases from 1% to 6%

On his part, the Lagos State Governor, Sanwo-Olu, said the number of COVID-19 patients admitted into isolation centres in the state increased in the last two weeks.

Sanwo-Olu, in a statement said only one per cent of the state’s population had been vaccinated.

He said the state would not relent in carrying our more tests, saying the government was expecting another batch of AstraZeneca vaccine soon.

According to him, the state is approaching the third wave of the deadly virus.

He stated, “We are now finding ourselves at what appears to be the start of a potential third wave of the COVID-19 pandemic, in Lagos State.

Rise in positive cases from 1.1% to 6% cause for concern – Sanwo-Olu

“From the beginning of July, we started to experience a steep increase in the number of daily confirmed cases, with the test positivity rate going from 1.1 per cent at the end of June 2021 to its current rate of 6.6 per cent as of July 8, 2021. The rapid increase within a week gives great cause for concern. Also, within the last two weeks, the occupancy rate at our isolation centres increased from an average of one per cent to six per cent. This is the new and disturbing reality that now confronts us.

“But we must not be demoralised by this. We must instead resolve that we will not leave any stone unturned in our bid to effectively mitigate the third wave of this pandemic in Lagos State. We will continue to test aggressively. We will also focus on sequencing the samples we are collecting to ensure we are detecting and keeping track of the different variants in circulation. It is only by testing and sequencing comprehensively that we can collect the data required for informed decision-making.”

Sanwo-Olu added that it was unfortunate that 18 per cent of the 50,322 passengers who came into the state between May 8 and July 7 could not be reach for monitoring and isolation.

He said, “Between May 8 and 7 July, 2021, a total of 50,322 passengers of interest arrived in Lagos via the Murtala Mohammed Airport. Of the 50,322 passengers, 18 per cent could not be reached by EKOTELEMED because of the provision of either wrong numbers or wrong Nigerian contact details to be reached on.

“It is the responsibility of passengers to ensure they provide the right details for us to reach them for proper monitoring. Going forward, passengers that do not provide the right details, including phone numbers they can be reached for monitoring and an address for isolation, will face serious sanctions including fines and imprisonment according to our Lagos State Coronavirus Law of 2021.

“As dictated by the Presidential Steering Committee on COVID-19, passengers from red-listed countries (India, South Africa, Brazil and Turkey) are required to observe mandatory isolation. So far, we have successfully isolated 2,386 passengers in Lagos State. Of this number, 15 per cent have absconded.”

The governor also mandated religious centres to observe COVID-19 protocols, adding that no centre should operated more than 50 per cent occupancy in enclosed spaces.

“Greater vigilance is required at this time in our churches and mosques and other places of religious worship. Even as we are pleased that religious houses are now open for worship, after the lengthy closures of 2020, we must not allow ourselves to be carried away by the illusion that all is now back to normal. This is especially critical, as Sallah approaches, in a little over a week from now.

“The festivities will no doubt bring people together in large numbers and create conditions that can sadly cause the spread of the coronavirus. We must not allow this to happen. For this reason, we are mandating full compliance with all protective protocols. Compulsory use of masks in all public places, social distancing, temperature checks, provisions for hand-washing and sanitisers, and a maximum of 50 per cent occupancy in enclosed spaces,” Sanwo-Olu said.

Also, the Kano state Taskforce on COVID-19 said the state had exhausted 209,502 doses of the vaccine the Federal Government gave to it.

It stated that it had commenced surveillance at the Malam Aminu Kano International Airport with a view to ensuring that international passengers coming through the airport are properly screened.

The Taskforce Coordinator, Dr Tijjani Husain, disclosed these in a telephone interview with The PUNCH in Kano on Sunday.

He said the surveillance, which was being carried out in collaboration with port health and other officials of the airport, was aimed at ensuring that inbound international passengers undergo the necessary health screening before leaving the airport.

“Any passenger who arrives at the airport must present COVID-19 test certificate otherwise he will be put on quarantine and subsequently go for test.

“The measure is taken to ensure that no passenger carrying the COVID-19 Delta variant or other deadly disease is allowed to spread the disease,” he said.

On COVID-19 vaccine, the taskforce coordinator said the vaccines the state received from the Federal Government had been exhausted and awaiting the arrival of another consignment.

“If you recall the Federal Government gave Kano state 209,502 doses of COVID-19 vaccine and all the doses have been exhausted and we are still awaiting for another consignment,” he said

Aluko, who said that since additional vaccines were not forthcoming when the state had vaccinated only about two per cent of its population, said there was no choice than to wait for when the Federal Government would get another supply.

He said, “We will wait. Ekiti will not go to the market to buy because the Federal Government cannot allow states to begin to engage in competition among themselves over vaccines. It will not augur well especially for smaller states. It is better for it to be centralized. So we have to return to our attempt at non-pharmaceutical controls”.

The coordinator said that the state would have to ramp up COVID-19 testing “to know people who have contacted the virus including whether the Delta variant has got into the state which is not impossible. We have to test, we have to isolate and to treat”.

Speaking to one of our correspondent, the Executive Chairman, Bauchi State Primary Health Care Development Agency, Dr. Rilwan Mohammed, said that the state had used all the Astrazeneca vaccine doses given to it by the Federal government.

In Enugu, the State Government said that it used all the AstraZeneca vaccine it got from the Federal Government before its expiration date.

The Executive Secretary Enugu State Primary HealthCare Development Agency, Dr George Ugwu, who spoke to one of our correspondents on telephone, said the agency exhausted all the doses of their vaccine on July 5, 2021.

The Director of the National Primary Healthcare Development Agency, Dr Faisal Shuaib, had last week said Nigeria would be expecting a shipment of 3.92 million doses of the Oxford/AstraZeneca vaccine by the end of July or early August .

Explaining the efforts of the NCDC, the spokesman for the director general, Oguano, advised Nigerians not to abandon safety measures.

He said, “What we are seeing now is not a backlog of cases, the number of cases are gradually increasing, we cannot say it is as a result of the third wave yet.”

Delta strain has the potential “to be more lethal because it’s more efficient in the way it transmits between humans,” the WHO’s Dr. Mike Ryan said.

The first confirmed case of COVID-19 in Nigeria was announced on February 27, 2020, when an Italian citizen in Lagos tested positive for the virus. This signaled the beginning of first wave in the country, forcing the Federal Government to declare a lockdown on April 27, 2020 with effect from May 4 to 17 spanning.

The second wave was between November 2020 and January 2021 when the country recorded an increased number of positive cases after the curve had flattened between August and September 2020.