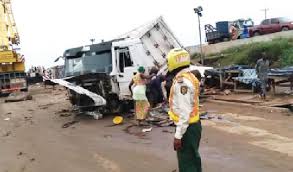 Four persons have been killed by trucks in Osun and Ogun states, while five clubbers lost their lives after their vehicle rammed into a stationary truck in Rivers State.

In Osun, a motorcyclist and his passenger were killed in a road accident in Osogbo, the state capital, on Saturday.

A resident of Oke Baale area, Dayo Adesina, said the motorcyclist was trying to overtake a truck heading in the same direction with him when the accident occurred.

“The motorcyclist, in fear of the impending accident, lost control and fell under the truck. The truck ran over them, killing the passenger and the rider on the spot.”

In Ogun, a truck crushed two persons to death after it veered off the road and rammed into a parked Toyota Camry on the Lagos-Ibadan Expressway.

Two persons were also injured in the accident, which occurred at the Magboro Bus Stop in the early hours of Sunday.

The driver of a Howo truck, with number plate, EPE 198 XV, was chasing another vehicle, which damaged the truck’s mirror.

A witness said the speeding truck veered off its lane, rammed into the Camry parked by the roadside and killed two of the occupants.