Find the latest bookmaker offers available across all uk gambling sites www.bets.zone Read the reviews and compare sites to quickly discover the perfect account for you.
Home » Entertainment » Celebrity » T. B Joshua was having sex with me & others regularly -Woman confesses 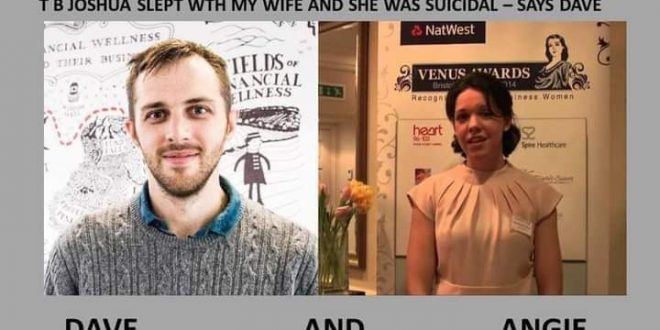 T. B Joshua was having sex with me & others regularly -Woman confesses

Dave’s wife confessed to her husband that T B Joshua had been sleeping with her after many years of guilt, depression and being suicidal – read below – very sad.

Now, this is not some hearsay. The was the Letter Dave wrote to SCOAN UK Branch after he discovered that T B Joshua had been sleeping with his wife Note that Both Dave and Angie were junior prophets in SCOAN and they headed the UK Branch.

T B Joshua’s chief security personnel, Claytus confirmed this to me and in our broadcast on the T B Joshua series – that he was there himself when Dave and Angie flew down from the UK to confront T B Joshua. in the Synagogue. He said he saw them and he himself confirmed that Angie was voiced it out at the gates that “This so-called man of God you have has been seeping with me”, He said it was not something someone told him. He said he heard it himself and watched everything play out when They came to confront T B Joshua at the Synagogue.

We apologize that our email earlier this week came as a shock to many. Since then, many have been asking why we made such a drastic decision after 10 years of total commitment to SCOAN. We pray that as you read, you will examine all we say in the light of God’s Word. Its so important to have independent minds – to go to God to seek for the truth.

First of all we would like to sincerely apologize for misleading you. We have deceived you in that we kept silent about many of things that take place at SCOAN in Lagos. We have also misled you by justifying and making excuses for many inexcusable things that take place at SCOAN and on Emmanuel TV. No matter our good intentions, before God we are responsible for this, and therefore ask for your forgiveness.

Over the last few years, Angie has suffered with depression and suicidal thoughts. She made sure she was strong for the team and in public, but it was a continual battle. In private, she would say things like, “I wish I was never born”, or “Its so difficult to continue with life, I’m praying for God to kill me”, or “If not for you and Loveth, I would kill myself.” I mentioned this to TB Joshua on the phone and he spoke to her and told her not to say things like that. I also mentioned it to him months later when I was in Lagos and he said he would speak to her.

Angie
Angie has been living in condemnation about these acts for the last 10 years. She felt she couldn’t tell anyone because she didn’t want to betray TB Joshua. This may sound ridiculous, but as a former disciple of TB Joshua I fully understand. As disciples we are conditioned to basically consider TB Joshua as infallible (he even has a teaching about this). Disciples will say he has weaknesses, but no disciple will tell you a weakness that he has. We basically consider him above correction, above wrong. We justify everything he does. Anyone who speaks against him is labelled as a Blasphemer. Questioning him is said to be questioning the Holy Spirit. As a disciple you are taught to be loyal to TB Joshua in all things.

So on the one hand Angie thought that these acts were OK because it was the “man of God” that was involved, but on the other hand she had huge amounts of condemnation. This secret was destroying her but she felt that to speak about it would be betraying TB Joshua and therefore working against the Holy Spirit. It took 3 years of marriage for her to get to a place that she felt she could trust me enough to tell me.

When Angie told me, it shocked me and caused some deep reflection. I believe her, for the following reasons:

Anger? I have seen TB Joshua:

Slap disciples, men and women, incredibly hard in the face
Push disciples over
Whip disciples until they bleed and urinate on the floor
Make disciples walk around naked to disgrace them
Make disciples kneel for 3 days as a form of punishment on numerous occasions.
Drops the phone when he hears something he doesn’t want to.
Throw his plate on the floor because he didn’t like the food
Call cameramen / commentators / ushers abusive names in the live service,
Kick the cameramen if they don’t get the “right shot” during the live service
Call disciples together to verbally abuse a disciple he is not happy with.

Deception? Here are a few examples of many.

In many of the healing videos, the audio of TB Joshua saying, “in the name of Jesus” is added later, although he never said it at the time. In TB Joshua’s personal testimony documentary, the photo of him in prison is blatantly photoshopped, yet it is claimed to be real.
The phone receivers in the office, lie often. TB Joshua instructs them to tell callers that he is either at the mountain or resting, when he is actually in the office.

Physically Challenged – In the live service many disciples told the world that they have made friends with the physically challenged and will phone them everyday. This didn’t happen.

Haiti – TB Joshua said we will be in Haiti forever and that whatever money we need to give the government for land, we should give it. 2 weeks later he said that we shouldn’t spend any money on the land, and that we should leave in 2 months if they don’t give us the land for free.

TB Joshua said to the media that we have adopted 500 orphans and that it is a 3million dollar project for Haiti. Even on Emmanuel TV they showed photos of children that it was claimed were orphans we were helping. They were not orphans, and when he spoke we hadn’t helped any orphans.

Out of the 20 disciples who have been anointed as Pastors to pray for the sick, only 7 are still with the ministry and only 5 are still allowed to pray for people. One had an affair and left his wife of more than 20 years. Others left because they weren’t allowed to get married. Three left claiming sexual abuse, etc.

Disciples often lie and many exhibit generally bad behaviour.
Many disciples who have been there for 15 years plus and are now in their 30s and 40s are not even allowed to think about getting married.

Here are a few things out of many, which upon reflection caused me to be seriously concerned about aspects of the ministry. Angie and I went to Lagos to speak to TB Joshua about some of these things, but were unable to meet with him. Our car was held at gun point and we were stopped from leaving the church by the Nigerian police (acting under instruction from TB Joshua). We had to push past the police and get onto a motorbike to be able to leave the church premises. Our driver later called us to tell us that TB Joshua had sent a vehicle full of police to the airport to look for us. We have video evidence of this.

So this is in a nutshell why we are leaving SCOAN. I know a lot of this will come as a big surprise to many of you. Especially as we were so positive about everything to do with Lagos. I can only say that I have been deceived for the past years. I said that we should examine everything in the light of God’s Word, but actually there were certain aspects of TB Joshua and his disciple’s lifestyles and actions that I didn’t examine in the light of God’s Word. I’ve ignored and made excuses for many of those things for many many years. For this I can only apologise.

Miracles or anointing are not a sign of infallibility or perfection. This is evident from the Bible and from church history. Matthew 7 and 1 Corinthians 13 are two chapters which we have spoken about at church that clearly make a distinction between the gifts on the outside and the character on the inside. Peter was the greatest apostle in the history of the church, yet he made some serious mistakes and had to be publicly corrected by Paul (Gal 2:11). Peter was not above mistake, and neither is TB Joshua. No-one is infallible. Even those who walked with Christ and received the Holy Spirit at Pentecost made some major mistakes. If you read the book “God’s Generals” you read about many people used mightily by God who made some very serious mistakes. Grace is grace, its unmerited favour. Either God uses imperfect people, or he doesn’t, who is to say which man is better than another. Romans 9:15 says God has mercy on whom He has mercy.

I believe that by God’s grace, a lot of what we’ve been building at SCOAN UK has honestly been for the glory of God and has been built on God’s Word. The church is not the structure, the name or the Sunday meeting. It is the people. My prayer is that each of us will draw closer to God in this time and that in whichever way we all move forward, God’s glory would be reflected in each of us.
I understand that this email my provoke more questions than it answers. Angie and I are happy to speak on the phone or communicate by email about any of these issues.

Love from Dave and Angie