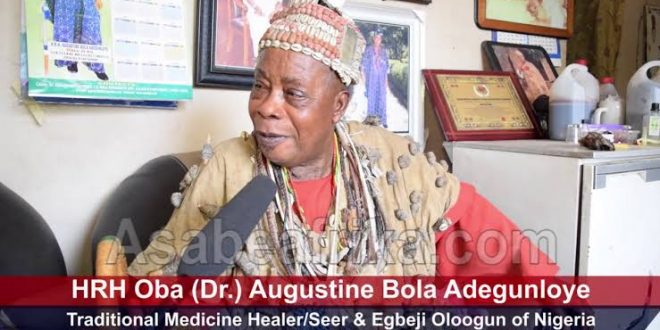 He later had his stint with the Nigerian Police force where he trained as an officer at the Nigeria Police College , Ikeja in 1970.

After years of service and due to his divine call to medicine, he later enrolled at Pageatic Science School , India between 1980 and 1983 where he studied the science of voodoo.

In his decision to be a complete medicine expert for local insight to his education, the young and energetic Bambola attended Lagos State College of Traditional Medicine on his return from India.

Aside his knowledge in Traditional Medicine,
Bambola Augustine Morakinyo started his early life as a transmitting officer at the Nigerian Broadcast Corporation , Ibadan Oyo State (Western Nigeria) between 1967 and 1968 .

He will later join the Nigeria Police force as a full rank Inspector and worked among other operations; Mopol 6 Enugu, FCID Alagbon Lagos, Inspector D3 Panti and as a Criminal Investigation Detective (CID) at Yaba.

Despite his family background as a warrior, he was groomed into Catholic faith as a teenager but while serving with the Nigeria Police force he was converted to the Celestial Church of Christ faith and worshipped at the prestigious Ire Akari Parish in the Isolo area of Lagos where he served as a Parish Treasurer and exhibited the gift of Prophecy (Wooli)

He left the fold in 1980 to focus on his calling as a herbal medicine practitioner .

Same year, he founded Saint Augustine Healing Home which has proffered spiritual solutions to over 2.5 million people of diverse culture, creed and orientation.

He is a member of the following organizations:

Commendations for his innovative healing gift in forms of awards and platonic honor were bestowed upon him in his life time, they are:

1.Certificate of Merit by Nigeria Association of Medical Herbalist (NAMH) – 1989

HRH Bola Adegunloye has 108 awards and medals of honor in respect of innovation in his field of operation.

He became the OTUN EGBEJI OLOOGUN OF NIGERIA in 1988

And later elevated to EGBEJI OLOOGUN OF NIGERIA in 1989

He was honored with the title of ALAKEJI AMOSINOPE OF ITA OSIN , ABEOKUTA OGUN STATE in year 2004

His media influence and presence spanned over three decades with various awareness radio and Television campaigns calling for cultural reforms and educational excellence.

He was the producer of Isese on NTA 7, Tejuosho between 1990 and 1993 where he treated issues of Ogbanje child, Witcthcraft and alternative medicine.

Till his death, his videos that trended with several revelations and fulfilled prophecies dotted YouTube as majority of his predictions on politics, institutions and individuals came to pass.

Last year, he predicted that the year will be a year of mysterious judgment and demise of many around the world calling it Reganok Day and it came to pass.

HRH Bola Augustine Adegunloye will always be remembered as an advocate and outspoken pillar of force against bad governance and corruption.

YOU WILL BE GREATLY MISSED IROKO NLA!!!

For this colossus of African Medicine, his philosophy was -“Make the best use of what’s in your power and take the rest as it happens”

N.B. Funeral details will be announced by family.