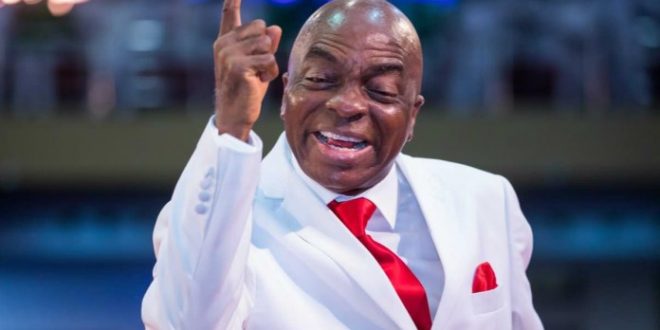 Twice when officials of the Ogun State Internal Revenue Service visited Canaanland, Ota, Ogun State, home to David Oyedepo’s Winners Church, university, secondary school and his many other businesses, to demand tax, they were thoroughly beaten up by his followers and workers. Nothing goes for free here, it’s a sprawling commercial conglomerate.
Also some years ago, in a video that went viral, Oyedepo himself was, during one of his many well-attended programmes, seen slapping resoundingly a young girl of about 14-15 years who had innocently countered his accusation that she was a witch. “I no be winch”, she had replied him and been promptly reduced to a slave with that heavy slap. Festus Keyamo took the matter to court as a case of assault and human rights abuse, but then we all knew that nothing would come out of it. I remember calling Keyamo about twice, when I was with TheNEWS magazine, to know the course of the case, until it was finally struck out.
In another instance of Oyedepo’s megalomaniac ruthlessness, he had refused to assist two pastors of his church, parish pastors in Delta and Akwa Ibom states separately, who were on official road trips but got involved in serious accidents that affected their spinal cord. The pastors appealed to their Bishop, a man they had worshipped as their spiritual father and even their God, as Oyedepo’s numerous brainwashed followers do, to pay their huge hospital bills. As the then Ray Ekpu-led NEWSWATCH magazine reported as its cover, Oyedepo not only disdainfully snubbed the requests, he also sacked the poor, ailing pastors and ordered them ejected from their official quarters, as he has just done with some 40 pastors. Oyedepo is not known to have a virtue of giving, of altruism, of empathy, even of forgiveness (lef am for God no dey his Bible; he takes his workers and followers who steal his money to court). One of the two accident-disabled pastors, in his naive optimism, took Oyedepo to court. Sheer namby pamby. Oyedepo was untouchable.
Every Sunday, the traffic complexion on the access roads from the Lagos end to the Winners Church at Ota, is excruciatingly pale as Oyedepo’s followers throng his church. The Sunday service is centralised at Canaanland and the church runs about 4-5 two-hour services to accommodate the crowd that flow in from everywhere. To be humane and save other users of the access roads and the main Sango-Oju Ore-Idi Iroko road the agony that the Winners crowd wreak on Sundays, Oyedepo could well decentralise the Sunday service and ask his congregants to worship in their neighbourhood parishes and fellowships. Teleconferencing even makes that easy now if the followers maintain they must watch their Bishop live as he preaches. But for the Bishop, that would be the day. There is the little matter of tithes, offerings and seed-sowing pledges to superintend directly.
History teaches that where the political leadership or the monarchy is corrupt, bad, fraudulent and insensitive to the plight of the masses, leaders of the two main religions, and especially Christianity, thrive, brazenly perpetrating their own fraud and knavery. France before the Revolution, old Russia before the Revolution, old England, and even the USA, where church leaders were in criminal cahoots with killer Mafia lords. Nigeria is windng through its own political and religion mill, grinding since Independence and so pronounced since pentecostalism invaded Nigeria. Bishops, pastors and even Islamic alfas are relishing the feast, mouthing God’s name to their followers but actually wishing the old France, Russia, England and US in Nigeria never ends.
I am not surprised one bit about the news Oyedepo sacked 40 pastors of his shop for not meeting targets. One of the affected pastors, Peter, asserted he was sacked for not meeting tithes and offering targets. That’s just businessman Oyedepo.
Oyedepo a man of God? Please excuse me while I laugh!

Addendum: A close friend and colleague just reminded me that Oyedepo’s goons did not stop at lacerating those tax officials, they extended the omo igboro treatment to the OGTV crew that tagged along.