Find the latest bookmaker offers available across all uk gambling sites www.bets.zone Read the reviews and compare sites to quickly discover the perfect account for you.
Home » Trending » Business » Vulcanizer Dies While Pumping Tyre in Warri 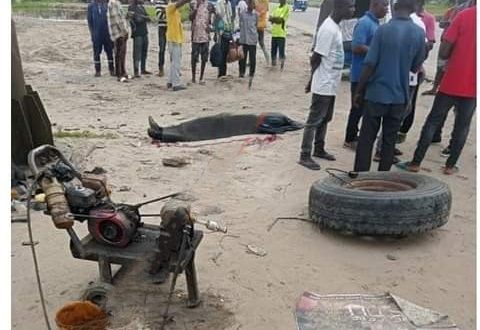 A yet to be identified vulcanizer has lost his life while pumping a trailer tyre in his workshop in Warri, Delta State. HGS Media Plus report.

The incident happened opposite wellington hotel just before PTI junction, along NPA expressway in Warri.

According to report, the vulcanizer was pumping a trailer tyre when an iron from the rim of the ryre pulled off and hit him on the head which immediately killed him.

HGS Media Plus gathered that it was due to high pressure from the tyre while pumping it that caused the iron to pull off from the rim of the tyre that killed him.