Home » Entertainment » Celebrity » Atiku says, I have reconciled with Wike, ahead 2023 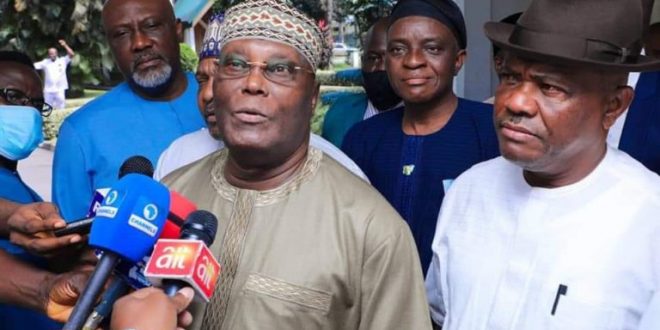 Atiku says, I have reconciled with Wike, ahead 2023

But Mr Atiku defeated his candidate to secure the party’s ticket to Mr Wike’s consternation.

Speaking with reporters in Port Harcourt on Thursday, Mr Atiku said he met with Mr Wike to reconcile party affairs and position the opposition party to wrest power from the ruling All Progressives Congress in 2023.

“Well, I came here to reconcile with the governor on party affairs and how we can ensure that there is unity and stability in the party,”

Mr Atiku, who analysts say may be oiling his political machinery for the run up to 2023 general elections, said.

“I think he (Wike) is the topmost governor we have in the party.

There is no doubt about that in terms of projects, youths and employment, in terms of security. Yes, we have security challenges all over the country,” the former vice president stated.

Lamenting insecurity and economic hardship in the country under the watch of President Muhammadu Buhari, Mr Atiku said the PDP will come up with policies to rescue the country.

“Why can’t you give us time. We will come up with our policies. We will present them to Nigerians when the time comes,” Mr Atiku told reporters.

“We have done that before. Under PDP, we recorded the highest economic growth, the best foreign reserves, we reduced unemployment. You know that we can do it?”

The PDP lost power at the center to the All Progressives Congress in 2015. The party was also defeated in the Presidential election in 2019.

Tags ahead 2023 Atiku says I have reconciled with Wike