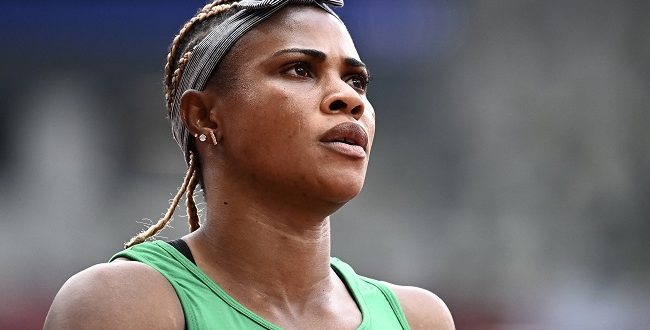 The Athletics Federation of Nigeria (AFN) has criticised the suspension of Blessing Okagbare at the 2020 Tokyo Olympic Games ongoing in Japan.

In a statement on Saturday, AFN President, Dr Ibrahim Shehu-Gusau, noted that the Federation received the news that the athlete tested positive for human Growth Hormone with great disbelief.

He described Okagbare, 2008 Beijing Olympics Long Jump silver medallist, as an athlete with impeccable records since her emergence on the track and field scene she was 16 years old.

“She has served the country in the best possible way without any scandal and is one of the most disciplined athletes not just in Nigeria but in the world over.

“She has always flown the flag of the country high at every level and that is seen in her career progression,” the AFN chief stated.

Okagbare and her Nigerian counterpart, Grace Nwokocha, were scheduled to run in the semi-finals of the women’s 100m after they both qualified from their respective heats before the news of her suspension broke.

According to him, Okagbare as an athlete has been tested over 12 times – both blood and urine – this since the beginning of the year.

He affirmed that in all of the tests conducted, nothing indicting was discovered and as such, “there must have been a mistake somewhere”.

As they expect the result of the B Sample, Shehu-Gusau clarified that Okagbare was not banned but only suspended from the games.

“We would also like to appeal to Nigerians to stand by her and put her in prayers, as we as a Federation continue to do everything in our power to encourage her as her well-being and mental health is our utmost priority at this time,” he added.

Growth Hormone is a non-specified substance on the 2021 World Anti-Doping Agency (WADA) Prohibited List and a provisional suspension is mandatory following an adverse analytical finding for such substance under the World Athletics Anti-Doping Rules.

The Athletics Integrity Unit (AIU), the independent body created by the World Athletics that manages all integrity issues for the sport, had announced that the Olympic medallist tested positive for Human Growth Hormone.

It said it collected a sample from Okagbare during an out-of-competition test on 19 July and the WADA-accredited laboratory that analysed the sample notified it of the adverse analytical finding at mid-day on Friday.