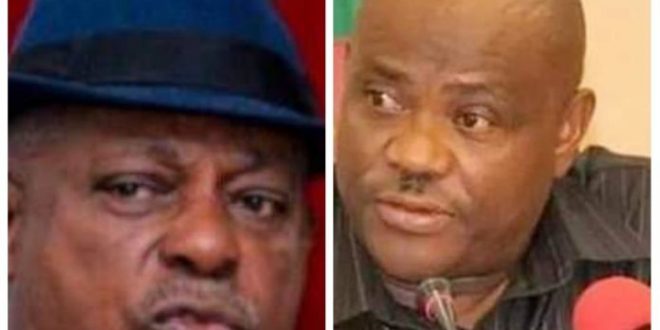 The Peoples Democratic Party’s Board of Trustees on Thursday opposed moves to sack the Uche Secondus-led National Working Committee and replace it with an interim caretaker committee.

It was gathered that at a meeting, which started at 11am and presided over by the board Chairman, Senator Walid Jibrin, members insisted that the National Chairman, Secondus, should be allowed to complete his tenure which would soon end.

It was also learnt that the party leaders faulted what they termed as uncomplimentary remarks by some party leaders, including the Rivers State Governor, Nyesom Wike, against the NWC.

The board, according to sources, also berated Secondus over his handling of crises in some state chapters of the party.

It had on Thursday been reported that the national chairman was battling to retain his position as Wike spearheaded moves to ensure his removal before the party’s National Executive Council meeting and the national convention.

According to the report, Secondus’ opponents reasoned that the national chairman would install his loyalists as members of the convention committee thus paving the way for his re-election.

It was alleged that Tuesday’s resignation of seven members of NEC was part of the moves to oust the national chairman and set up a caretaker committee, which would organise the next national convention.

At Thursday’s BoT meeting, it was learnt that the seven NEC members, who resigned, were asked to withdraw their resignation.

Findings also indicated that members insisted that Secondus should be allowed to end his tenure.

It was gathered the meeting, which was held behind closed doors, afforded party leaders the opportunity to speak frankly to one another.

A member of the board, who spoke to our correspondent on condition of anonymity because he was not authorised to speak to the media, said, “ Based on the outcome of the meeting today, members want Secondus to finish his tenure, We are not in support of any interim arrangement. We spoke frankly to one another and apportioned blame where we needed to. We looked at the bigger picture, the interest of our party.

“Most of the speakers expressed dissatisfaction with uncomplimentary remarks about our chairman by one of our leaders who was present.

“Referring to our leaders as ‘tax collectors’ and ‘liars‘ was an insult on all of us and we said so.

“Of course, there were those who spoke up about the shoddy treatment our chairman had given them over matters he was expected to handle better but did not.

“Some of our senior party leaders who recently left did so in anger because they felt badly treated in their state chapters despite staying with the party through its most difficult times.

“He was also told in clear terms to improve his relationship and interaction with members because politics is a game that also involves a lot of egos.”

Recall, on June 23, 2020, Wike said, “Some NWC members are tax collectors” while announcing his withdrawal from the Edo PDP reconciliation committee.

Another source stated, “Just like many of our leaders including our ex-officio members have canvassed, the aggrieved persons who have tendered resignation and some who have threatened to follow suit were encouraged to rescind their decision in the interest of our party.”

It was, however, agreed that those who refused to withdraw should be replaced.

After Thursday’s BoT meeting, a former President of the Senate, David Mark who addressed journalists, said, “We resolved at the meeting to set up a committee that will look at the situation.

The former Senate President expressed confidence that the peace move “will not only stop the current crises, it will lead to providing a better environment to make us far more United and make us stronger as a party.“

He also dispelled speculations t Wike was summoned to the meeting. Mark explained that Wike attended the meeting as a BoT member.

Also, the BoT Chairman, Jibrin, described the meeting as “frank and sincere“. He expressed confidence that all the issues would soon be resolved.

In his remarks, former Senate President Bukola Saraki said, “We all came together to address some issues and because of the urgency of the matter, we agreed to set up this committee urgently and within the next 48 to 72 hours, they will meet and at the end of that meeting, the country will see where the direction the party is going.

“The presence of all of us here is because this meeting of today is important in addressing some of those issues.

“My own message to Nigerians is that we know the importance of this party to this nation in addressing the challenges ahead of us. So let us come together as a party and salvage this country.“

Earlier, in his address of welcome, Secondus urged members of the board to consider the work so far done and the fact that any disruption of the move towards a peaceful transition in December would not be in the party’s best interest.

He said, “This is the first time in the history of our party, regardless of divergence of opinions that this current NWC has been in office and nearly three months to the convention that we will be ending this regime in a smooth transition that will be taking place without rancour or problem.

“Let me report to the BoT that of truth based on what the Chairman of the BoT has said, that seven deputies members of the principal working committee resigned.

“We quickly deployed the internal conflict resolution mechanism so that the issues are not escalated to the point that our party will be greatly damaged.

“You are aware that the National Youth Leader took a stand that is outside the conduct of our normal process of settling grievances and thereafter he on his own has been going on, on the wide-scale allegations and so forth.“

“My opinion is that anything contrary to the smooth running of our party, towards these three months that is remaining will not be good enough for our party.“

Attempts to speak to the Rivers State governor after the meeting were unsuccessful. As soon as he stepped out of the PDP National Executive Council Meeting Hall at the Wadata Plaza, National Secretariat of the party, a group of reporters and cameraman approached him for an interview, he simply walked into his waiting SUV and left.

Meanwhile, in a statement issued by his Media Office, former Vice President Atiku Abubakar appealed to aggrieved party members to give peace a chance.

In a statement titled, “PDP: Atiku calls for calm, urges reconciliation process be given a chance,’ signed by his Media Adviser, Paul Ibe, Atiku said those who wanted Nigerians to continue with the current hardship in the land would be eager to fuel the crisis in the PDP for their political advantage.”

The former Vice President called on PDP leaders to unite for the sake of the party’s interest and the country.

Also, six-officio members of the party called for calm. In a statement signed on their behalf by Yunnana Illiya and Chief Okey Aro, they said,” We consider the recent resignation of some members of the National Executive Committee of our party, following allegations of abandonment against our National Chairman, Prince Uche Secondus as hasty and ill-advised. It is our considered opinion that they should have explored internal dispute resolution mechanism to resolve their grievances.