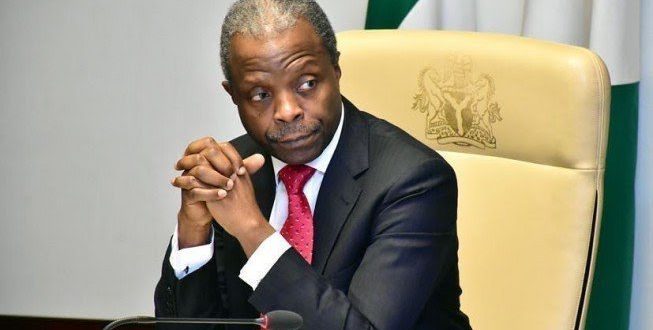 Vice President Yemi Osinbajo (SAN), under the aegis of Osinbajo Grassroots Organisation is being pressured to contest for the presidency come 2023.

They described Osinbajo as “a neutraliser and stabiliser”, who had provided the backbone for the President, Muhammadu Buhari .

Members of the group said this during the second edition of Osinbajo’s Day which was held in Abuja with the theme: “Run, Osinbajo run: The future beckons, in Abuja.”

Among them were the Director-General, Advocacy for Good Governance, Hussain Coomassie and a retired veteran journalist, Akin Makanjuola.

Some of them carried placards with inscriptions such as ‘In Osinbajo, we see a loyal leader’, ‘2023: Let Osinbajo lead’, ‘Nigerians love Osinbajo’, ‘Great Nigeria, Great Nation, Great Osinbajo’, ‘Thank you, Buhari for giving us Osinbajo’ and ‘Osinbajo: The future beckons.’

The Convener of OGO, Funsho Ojo, in his speech titled: “Unhappy is the Land that has no heroes”, said the VP has been adopted as their role model.

“We are appealing to Vice-President Yemi Osinbajo to throw his hat into the ring and take up higher responsibility having worked diligently with the President and with great results to show.

Previous Ghanaian passport holders now to travel to UAE without visa
Next Secondus may be removed today, as PDP govs meet