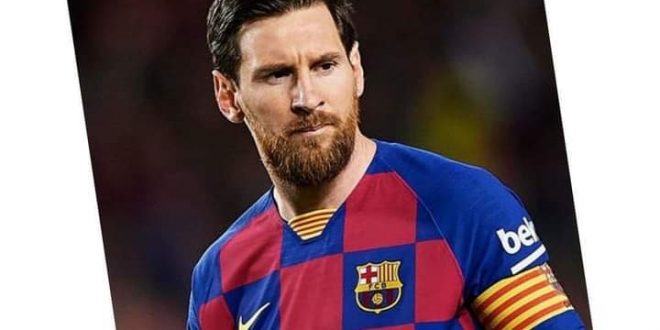 It was a breaking story some hour ago that Messi has formally received a two-year contract from
PSG, though it was from sources.. And the
deal not yet formalised.

Now from the horses mouth Messi has confirmed he could join Paris Saint-Germain (PSG) after his reluctant departure from the Spanish giants.

The 34-year-old Argentina superstar is a free agent after his contract at Camp Nou expired.

Asked about possibly joining the Parisians, Messi said: “That’s honestly one possibility, to reach those heights. At the minute, I’ve got nothing confirmed with anybody.”

According to Messi, there has been interest from a host of clubs in signing him.

He did not mention any other potential suitors, and only the richest clubs in the game are likely to be able to afford to acquire him, given his high wages.

“When the press release was published (that I was leaving FC Barcelona), I had a lot of calls, a lot of clubs that were interested,” Messi said.

“At the minute, I’ve not got anything closed but we’re talking about a lot of things.”

Asked about the possibility of facing FC Barcelona with his next club, he added: “The people in Barca know me, they know I’m a good player and they know I like competing.

“If I’m going to come here, then like I did here, I’ll fight to win everything. The last years of my career, I’ll finish it in my way, competing and fighting for titles, ending my career on a high.”

Last year, Messi had asked to leave the club via the Spanish post’s burofax service but changed his mind.

This time, he came to an agreement to stay but financial stumbling blocks at Barca meant La Liga would not allow the deal.

He is out of contract and will leave for free, with Messi saying a PSG move is now “possible” but that he has no final agreement with anyone at present.

“I’ve been here so many years, my entire life since I was 13. After 21 years, I’m leaving with my wife, my three little Catalan-Argentine kids, and I can’t tell you we won’t come back because this is my home, and I promised my children that.”

Messi wanted to leave Barca in 2020 amid a disagreement with then club president Josep Maria Bartomeu.

However, he insisted he was wholly committed to staying this time around.

“Last year, I wanted to leave, but this year I didn’t. I was always completely up front about everything and I have to leave the club I love,” he added.

“This is the most difficult moment of my career. I have been through tough moments, defeats… but the next day, you go back to training and you have another chance to avenge yourself.

“That isn’t going to happen here, it’s the end. Now another chapter starts.”

The coronavirus pandemic also meant Messi played almost the last season-and-a-half of his Barca career without fans in attendance.

Asked if he would return to bid farewell to a full Camp Nou, he replied: “Obviously, for these people, I’m available for anything. Honestly, yes.

“I never imagined it this way. I leave this club without seeing the fans for a year and a half. If I’d imagined it, I would have imagined it with the Camp Nou full and being able to say goodbye properly,” the Argentina captain said.

Messi won 35 trophies with Barca, but acknowledged he feels the Blaugrana were lacking just one more title.

“I would have liked to have won another UEFA Champions League,” he said.

“We got to the semi-final (in 2019) and were knocked out by Liverpool. That’s football. But I don’t regret anything.

“I tried to give my best, and sometimes it works out for the better or worst. I’m of the opinion we could have won more, but I achieved my objectives”.

Lionel Messi was in tears on Sunday as he confirmed his departure from Spanish side FC Barcelona after 21 years with the club.

Messi was set to sign a new deal with Barca, but is now heading for pastures new —- possibly Paris Saint-Germain (PSG).

This was after the Catalan giants could not afford to fulfil the contract they had agreed.

The 34-year-old took to the stage for a news conference on Sunday, in front of the media, his family, Barca teammates and club officials.

He was emotional before he even made an opening statement, as he revealed he had never imagined a moment when he would have to leave Camp Nou.

“These recent days, I’ve been giving lots of thought to what I could say, and the truth is that I can’t think of anything,” said Messi, who subsequently let the tears flow as he received a standing ovation.

“This is really difficult for me after so many years, being here my entire life.

“I’m not ready for this and honestly last year, with all the nonsense with the burofax, I was convinced I knew what I wanted to say. But this year is not the same.

“My family and I were convinced I wanted to stay here, that’s what we all wanted more than anything. We thought we’d be staying here in Barcelona, (but) today I have to say goodbye to all of this.

“We’ve always made this our home, we’re at home and we thought we’d be staying here in Barcelona.

“The time we’ve had here in the city and the sport has been amazing, but today, I have to say goodbye to all of this.”