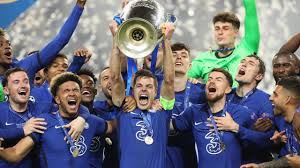 The Blues defeated Villarreal 6-5 on penalties after both sides settled for a 1-1 draw in 120 minutes.

Kepa Arrizabalaga was the hero for the Blues after saving two penalties during the shootouts.💪🙌👏

Kepa Arrizabalaga came from the bench in the 119th minute to save two spot-kicks for the Blues on their way to glory after both teams settled for a 1-1 draw in 120 minutes.

Thomas Tuchel has now won two major European titles for the Blues just eight months into his reign as their manager.

In all fairness, The Spanish League side gave up a very good fight in the open game but lost two spot-kicks during the shootouts to hand Chelsea the title.

But nearly no be win.