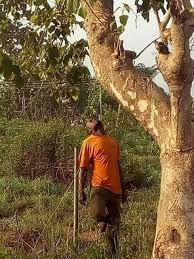 A 62-year-old man, Moshood Lasisi, has been found dead in his room at Ayede Ogbese community in the Akure North Local Government Area of Ondo State.

It was gathered that the deceased, who was on crutches, hanged himself when his wife and children went to the farm.

The reason for the suicide could not be ascertained, as Moshood did not leave any note.

According to a source in the agrarian community, the incident was discovered by his wife, Victoria.

The source said, “When the wife came back from the farm, she knocked on the door several times, but the husband did not open the door. She then peeped through the window and saw his body dangling from the rope he used to tie himself to the roof of the room.

“The incident threw the community into mourning; everybody is wondering why the man took his life. Though he had dislocation and was on crutches, his wife and children took good care of him.”