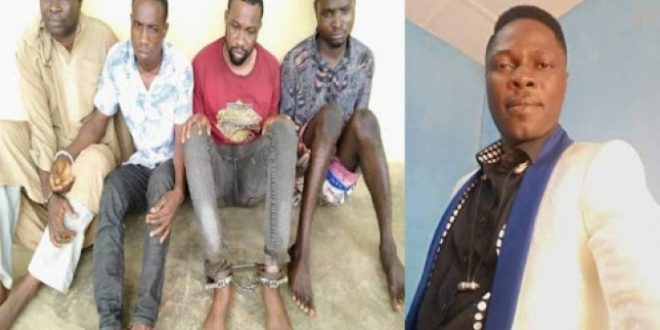 Fact have emerged on gruesome murder of a POS in Ogun State .

The kingpin, Kehinde Saliu Jelili a.k.a as Oluomo is already singing like kenerry.

His arrest, by somewhat divine providence, made the subsequent arrest of other gang from where they are cooling off.

After month of laborious, intensive and extensive investigation Police arrested the syndicate .

Thegangspecialise in luring, robbing and killing POS and Uber operators.

The blood of many filled their hands, as they confessed to rob and kill strategy.

The suspects, Kehinde Saliu Jelili a.k.a as Oluomo, Abiodun Akinola, Johnson Fakeye and Jamiu Akinola,  were all arrested following a report lodged at the Onipanu Police  Divisional Headquarters, Ota, on April 18, 2021, by one Aanu Salaudeen, a POS attendant that her boss, Abiodun Odebunmi had left his office located at Aparadija Area of Ota the previous day, but failed to return.

She explained that Abiodun had been called on phone by a customer to come with a cash sum of N4m for POS transaction.

The POS attendant who told the police that efforts to reach her boss on phone yielded no positive result as his phone had been switched off, said the ‘customer’ had earlier carried out a transaction of N1.5m with Abiodun.

She added that it was the same person who called her boss to meet him at Ojuore in Ota, for another POS transaction of N4m.

“Upon the report, policemen at the Onipanu Division commenced investigation into the sudden disappearance of the man, their efforts paid off when the dead and burnt body of Abiodun was discovered inside an uncompleted building at Arobieye Area of Ota.

“The case was therefore transferred to the Homicide Section of the State Criminal Investigation and Intelligence Department, and the Commissioner of Police in the state, Edward Awolowo Ajogun, mandated the homicide team to unravel the perpetrators of the dastardly act within the shortest possible period.

“The CSP Femi Olabode-led homicide team, in compliance with the CP’s directive, embarked on technical and intelligence based investigation, which led them to Otun Ekiti in Ekiti State where the suspect was discovered to be hibernating.

On getting to Ekiti, the suspect got wind of the presence of the detectives and quickly escaped to Offa in Kwara State”. Abimbola Oyeyemi, the spokesperson of the Ogun State police command said in a statement.

According to Oyeyemi, the homicide  team continued trailing the suspect and they later got information that he had crossed to the neighbouring Benin Republic, where he had gone to attend the court session of Sunday Adeyemo a.k.a Igboho.

The dead end came on a particular night around ile-iwe, area of command, behind Abule Egba area of Lagos State.

He was stopped by policemen during occasional checking point.

He was driving in company of obviously traditional worshippers of deities from Benin Republic .

He was flag down.. and one of the police officers, who had his circulated photographs,image in his head sensed he is the one.
While was asked to drive into Station.. He offered them #millions to let him go..his offer was rebuffed.

YOU NEWS sources at the station said, he was disarmed that night, with all fetish/ juju paraphernalia on his body removed.

“On interrogation, Kehinde Salihu Jeili, who claimed to be a native of Apomu in Osun State confessed to killing the victim. He confessed further that he deliberately lured the victim to Ota where he and his gang members were waiting for him with the money he was asked to bring, having transacted a N1.5m naira business with him the previous day.

“He said they hacked the POS operator to death after collecting the sum of N4m from him. He stated further that they burnt the victim’s corpse in order to cover their tracks.

He confessed further that his gang always targeted Uber and POS operators. According to him, one of them will pose as a passenger to the Uber driver, and will lure such driver to where his members would be waiting, and as soon as he gets to the place, the driver will be hacked to death and the car will be taken away to their receiver”. The PPRO added.

Also, the suspect confessed that he and his gang had attacked one Idowu Ademiluyi at Itori Area in Ewekoro Local Government Area and snatched his Toyota Corolla car, after inflicting lethal machete cuts on him.

The arrest of Salihu, however, led the detectives to the gang’s receiver, one Abiodun Akinola.

The confessional statements of both Saliu and Akinola led to the arrest of Johnson Fakeye and Akinola Jamiu at Atan-Ota and Owode-Yewa respectively, on August 14.

One Toyota Camry, a Toyota Corolla and one Toyota Rav 4, whose owners had been gruesomely murdered were recovered from the gang.

Meanwhile, the Commissioner of Police, Ajogun, who was full of praises for the team for the painstaking investigation which lasted for almost three months, directed the team to ensure that the last member of the gang is arrested.

The CP, therefore, advised  members of the public to always disclose their movement to at least one person, whenever they have cause to keep appointment with an unknown person.

The suspects will be charged to court as soon as investigation is concluded.