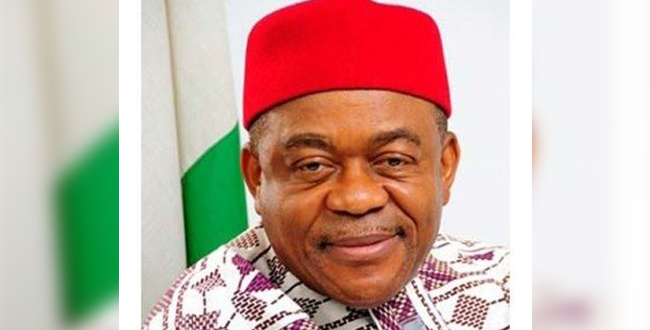 The Senator was reportedly on his way to London when he was picked up by EFCC operatives at the Nnamdi Azikiwe International Airport on Thursday.

Ex- Governor of Abia state, Senator Theodore Orji and his son, Chinedu were arrested by the Economic and Financial Crimes Commission.

The duo were arrested on Thursday over alleged N48billion security votes fraud.

The two leaders are also expected to account for N2billion Ecological Fund and conversion of Sure-P funds.

While the ex-Governor was intercepted at Nnamdi Azikiwe International Airport in Abuja before boarding a flight, his son reported to the EFCC headquarters.
According to a source, the ex-Governor, who has been on the Commission’s watch list, was intercepted at the Nnamdi International Airport, Abuja at about 1000 hours on Thursday and brought to the headquarters of the EFCC at Jabi, Abuja for the continuation of his interrogation.

According to the EFCC, Orji is being interrogated over corrupt financial dealing while serving as Governor between 2007 and 2015.

The EFCC added that sometime last year, Senator Orji had approached the agency and requested for the release of his travel documents to enable him go to Dubai for medical treatment.

However, the EFCC noted, the serving Senator failed to return the travel document.

The EFCC said it has asked Orji to report at the EFCC headquarters again on Friday for the continuation of his interrogation.