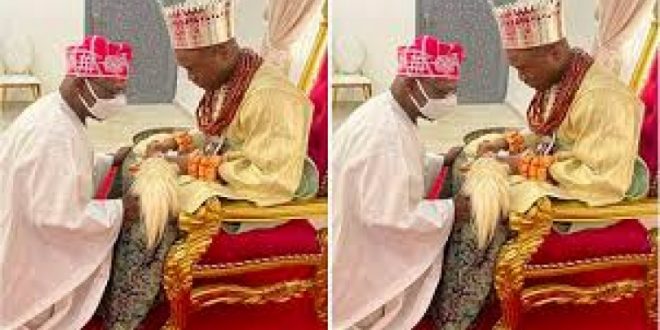 Obasanjo ‘ve seen 3, prays not to see 4th Olu of Warri in his lifetime

Former President Olusegun Obasanjo, on Sunday prayed not to see the fourth Olu of Warri in his lifetime after witnessing three coronations.

Obasanjo at the thanksgiving service said he had witnessed the coronation of three monarchs for the Itsekiri nation, saying he would not want to see another one in his lifetime.

Governor Ifeanyi Okowa, former governors of Delta state, James Ibori, Dr Emmanuel Uduaghan and former National President, Christian Association of Nigeria (CAN), Pastor Ayo Oritsejafor were among dignitaries at the Thanksgiving service held yesterday at the Palace of the Olu of Warri, Warri south local government area, for the successful coronation of the Olu of Warri Ogiame Atuwatse III, at Ode Itsekiri, the ancestral home of Itsekiri nation.

Obasanjo urged Itsekiri sons and daughters to work with the new monarch to achieve greater development in the kingdom, praying for the new monarch and wishing him long life and peaceful reign

“I am one of the happiest on your installation because God has especially favoured me to see three Olus and I don’t pray to see the fourth one. I want to emphasise that the position you occupy today is given to you by God but with your own people surrounding you and you must always remember that”, he said.

“If God has given you a role to perform you will be offending God if you fail to perform that task,” he said.

Continuing, the former President enjoined the new monarch to be close to God, noting that he had started well. “Be very close to God in whatever situation you may find yourself and God will surely make a way for you,” he said.