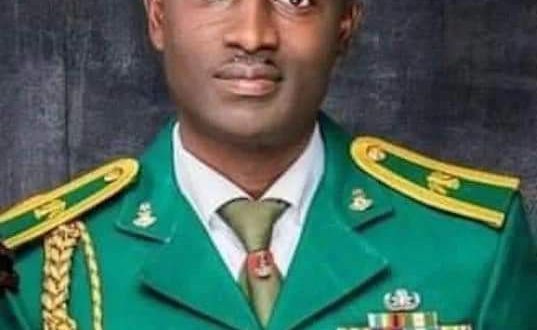 Despite multiple reports of his death, YOU NEWS has confirmed that the abducted Major Christopher Datong is still alive.

Major Datong — not ‘Stephen Dantong’ as initially reported — was abducted in the wee hours of Tuesday morning when assailants reported to be ‘bandits’ gained access to the Nigerian Defence Academy (NDA) in Afaka, Kaduna State, killing two officers and abducting him.

Multiple platforms had reported that his body was found, but findings confirmed that up till 10pm on Tuesday — hours after the supposed death was reported — both his family and the NDA got proof of life from his captors.

His abductors spoke with two different members of his extended family, both women.

They asked Major Datong to name someone he trusted the most whom they could talk to, and he did.

So negotiation is ongoing !.

Since Datong named his negotiator, the ‘bandits’ have refused to talk to anyone else.

“Every call they make, they give Datong the phone to talk to his self-appointed negotiator, just so that we have a proof of life,” a source very close to the family revealed this Wednesday morning.

“He is alive. This much I can confirm. As of 10pm on Tuesday, he was still alive — and this was hours after the circulation of reports of his death.”

Though it cannot be entirely ruled out, that the Military will address rumours of Datong’s death.

“They are unhappy with the way information has been leaking,” a senior source in the NDA said, “so they are determined to control information”.

The NDA source also added: “The Army is very closely monitoring the situation but it does not want to use force because of the high chance of collateral damage.”

It will be recalled that on Tuesday, the terrorists got in touch with the NDA to demand a N200million ransom, but the defence academy was unwilling to enter any negotiation with the bandits.

–
against the widespread reports of his death, Fisayo, in a statement posted on his verified Facebook page stated that Major datong is still alive.

Recalls that the media was awashed on Wednesday with claims that Datong, who was kidnapped by Bandits on Tuesday after an attack on the Nigerian Defence Academy in Kaduna, had been killed.

But taking to his Facebook Page, Soyombo disclosed that Datong was indeed still alive.

He wrote; “FLASH: Despite multiple rumours of his death, Fijnigeria can confirm that the abducted Major Christopher Datong is still alive.”

“Reports of his death are NOT TRUE.”

Meanwhile, a Lieutenant Commander simply identified as Wulah and Flying Lieutenant CM Okoronwo have been identified as the victims who were shot dead during the invasion of Afaka barracks of the Nigerian Defence Academy (NDA) on Tuesday morning.

It was reported that bandits broke into the prestigious military institution around 1am.

A source within the barracks said the attackers struck when many were asleep, adding that security was beefed up to prevent the armed men from escaping with their victims.

It was gathered that one Major Datong was kidnapped in the incident while an officer simply identified as 2nd Lieutenant Onah sustained gunshot injury and is currently receiving treatment at NDA hospital.

The attack happened less than a week after President Muhammadu Buhari charged security chiefs to double up their efforts because he did not want to leave office as a failure.

Previous Troops Are in Hot Pursuit of Armed Bandits who Attacked NDA
Next BREAKING: 36 Victims Burnt Alive by Bandits in Plateau