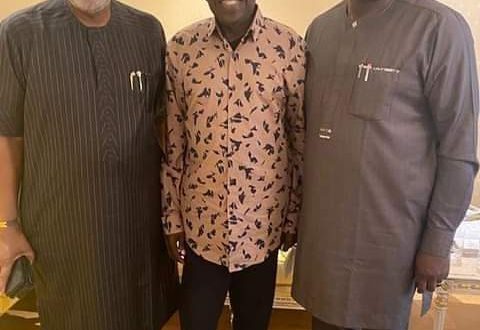 Ekiti State Governor, Dr. Kayode Fayemi and his counterpart in Ondo State, Rotimi Akeredolu were in London, United Kingdom to visit the National leader of the APC, Asiwaju Bola Tinubu.

The duo were captured on Wednesday in a photo with Tinubu in London.

Asides Fayemi and Akeredolu, Governor Babajide Sanwo-Olu had first visited Tinubu in London in July, when he said the APC leader was fine and in good health.

President Muhammadu Buhari also made a surprise visit to Tinubu in London where he took several photos with him.

Also, former National Legal Adviser of the APC, Dr. Muiz Banire visited the former governor of Lagos in London to solidarise with him and wished him quick recovery.

Commenting on the visit a public affairs analyst said

“The Kingmaker and his philosopher Kings

Two Executive Governors who benefitted in the past from the political dynasty of Asiwaju Bola Ahmed Tinubu have visited him in #London, where he is recuperating, to wish him well.

Governor Oluwarotimi Akeredolu Aketi of Ondo State (left) and his Ekiti State counterpart, Governor Kayode Fayemi have since entrenched their own power blocs but they still acknowledge Tinubu’s role in their political evolution and wish him good health and long life.

For now, the Kingmaker is contented with enjoying his quietude. He probably will continue to relish bigger roles in the future as a kingmaker rather than challenging to be the ultimate King.

Did you notice how well-rested the #Jagaban is? “