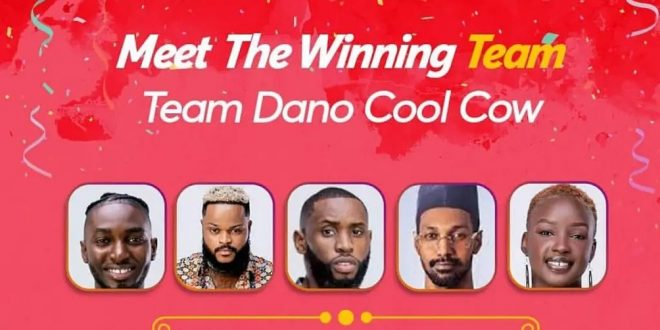 Whitemoney, Saskay, Yousef, Jaypaul, and Emmanuel are members of Team Cool Cow, and they all share N1.5 million as their prize, along with a one-year supply of Dano goods, as revealed on Thursday, August 26.

The task’s subject was “Go for it!” and the housemates were asked to come up with unique ways to portray the concept.

Following the brief, the Housemates viewed a tape to get a sense of what to expect: a presentation depicting one’s determination to succeed in the face of adversity.

For the task’s debut, a member of each team was blindfolded and had to go past obstacles to reach the finish line.

When they arrived at the location, the team members gathered to show their playlet and dance, which included songs.

After the results were tallied, Team Cool Cow emerged winners with N1.5 million to divide amongst themselves, while the remaining housemates would get a one-year supply of Dano goods in exchange for their participation in the challenge.