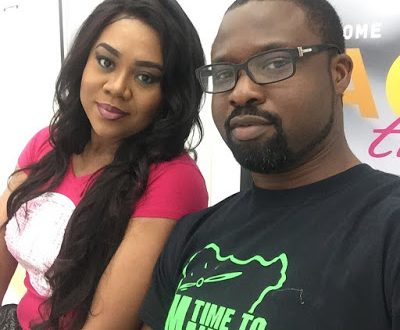 Stella Damasus’ marriage to Ademinokan whom she snatched from Doris collapses

Nollywood actress Stella Damasus and producer/director, Daniel Ademinokan is now beyond redemption.. It has collapsed irredemably!

There is no hope of reconciliation anyways.

With Stella, who was once married to Jaiye Aboderin, life must go on even after dumping her third husband, Daniel Ademinokan.

This was after the beautiful actress’s marriage to her second husband, Emeka Nzeribe, crashed.

This must have prompted her to relocate abroad with the two daughters she had for late Aboderin.

She was said to have started dating Ademinokan, whose first marriage was to Nollywood actress, Doris Simeon.

Then, the producer/filmmaker abandoned Doris, and took their only child along with him to the United States to live with Stella. Doris claimed not to know when Daniel went away with their son, David.

This episode set the two Nollywood personalities—Stella and Daniel— on the front burner of husband-snatching criticisms for many years.

Daniel Ademinokan was her third husband.

He would always celebrate Stella on social media and referred to her as his queen.

They got married and the duo took to evangelism through music and they became gospel music ministers. While Stella remained the lead vocal, Daniel was saddled with strumming the guitar.

On the other hand, the couple ‘terrorised’ Doris Simeon with their Public Display of Affection on Instagram.

There was a time Stella even granted an interview and said she never snatched Daniel from Doris.

She said in parts, “one of the comments I have seen consistently, over and over again’ is, ‘Stella snatches somebody’s husband’; ‘Stella the husband snatcher which is what has been going on.”

“And I had sworn that I would never talk about it or even listen or stress myself about the issue. But I have decided to talk about it now, so that I end it once and for all.

How is it possible to go to somebody’s home, and take a man, and take his son, away from his home and say follow me.”

That was seven years ago. The union has crashed irretrievably.

Ademinokan was said to have walked out of the marriage and relocated to another state in the United States of America, where the couple lived.

Though both have been saying the union crashed due to irreconcilable differences, this is Daniel’s second time of walking out of marriage.

Now, the estranged couple has unfollowed each other on all social media platforms including Instagram.

Already, all their lovey-dovey photos of each other have already been deleted on their handles..

However, recently, the actress put up a post of her first daughter who locked 22 years old.

The 43-year-old made this known in an Instagram post, recounting her experiences as a young mother. She also shared photos of her first husband, Jaiye Aboderin.

“Happy birthday my darling daughter, you’re 22 today. I still can’t believe it because it seems like yesterday when I had you at 21, I was scared and worried, I didn’t know how I was going to be a mum, the kind of mum you need,” she said in parts.

Many have wondered how Stella would move on with life after Ademinokan, who she paired with to haunt Doris on social media.

Though Stella and Daniel have kept quiet over their split, there are occasions they throw shades at each other.