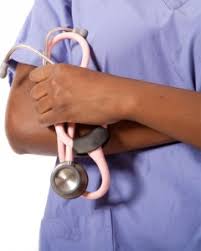 Why would doctors be struggling for employment at a job interview organised by Saudi Arabian officials at the Sheraton Hotel, Abuja ?

It is purely Brain-drain !

The recruitment exercise – also held in Lagos – is one of the latest moves to poach the country’s doctors who have been at loggerheads with the Ministry of Health over their welfare and other benefits.

While different governments have in the past bargained with them, the medical doctors claim most of the agreements reached have not been implemented by the authorities.

Irked by the lack of commensurate benefits and what they described as poor working conditions, some of them have moved out of the country to places – Europe, Asia, US – where they claim provide better conditions for their trade