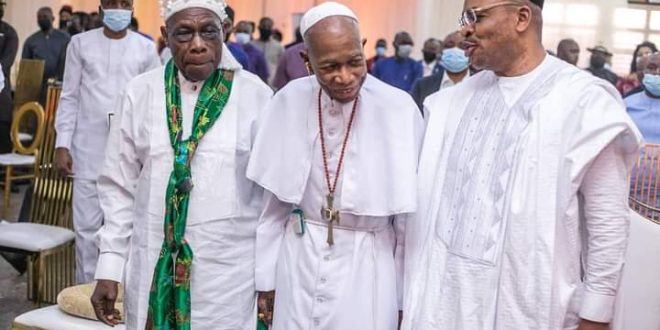 President Obasanjo who came adorning a full Ibibio traditional attire, in his speech, described Dr. Mbang as a lover of Nigeria.

Governor Udom Emmanuel in his remarks poured encomiums on the celebrant describing him as a shining example and a worthy citizen of the state. He wished him God’s continued protection.
Justice Mary Abounu, wife of the Benue State Deputy Governor who represented Governor Ortom also praised Dr Mbang for spreading the world across Nigeria.

In his remarks before launching the book with N10million, Mr Akanimoh Udofia described Mbang as one of our greatest role models.
Apart from Udofia, Odole of Ife, Sir Kessington Adebutu and others also launched the book with hefty sums which was evidence that Prelate Mbang had indeed lived an impactful 85 years on earth.