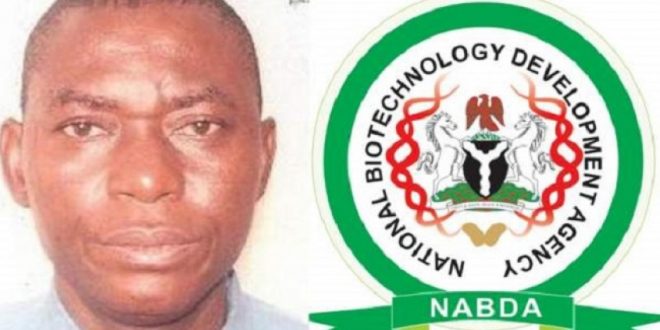 An Assistant Director at the National Biotechnology Development Agency (NABDA), Mr Christopher Orji has reportedly taken his own life after the Economic and Financial Crimes Commission (EFCC) invited him.

His lifeless body was reportedly seen hanging on a rope tied to a ceiling fan at his residence at Federal Housing Authority Estate, Lugbe, Abuja, on August 30th at about 3:30pm.

It was gathered that the 59-year-old man had been invited by the EFCC to report at its Abuja office on the day he was found dead.

A staff of the agency, who pleaded anonymity, while speaking with Tribune Online, said “It’s pathetic.”

He described the deceased as a person who is calm, does not argue with people and always smiling.

He said Mr Orji’s being single and had no children at his age could also lead to him committing suicide.

“He is a calm and always smiling person,you will never see him in an argument with anybody. The only tragedy is that he has no wife and children, this can lead to suicide as well, just my personal opinion bro,” the source said.

“You people should leave me alone, you can come and do your investigation,” she said

Previous Arrested.. Another gang of 3 who murdered an UBER driver, dump body @ Abule Egba
Next BBN: I didn’t have sex with Boma, we acted a script, Tega insists