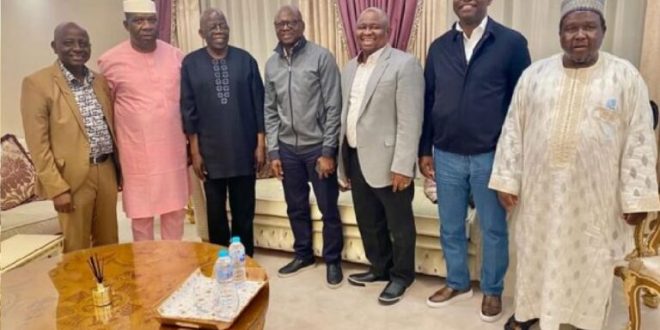 The National Assembly members under the platform of the All Progressives Congress (APC), have visited the National leader of the party, Asiwaju Bola Tinubu in London, United Kingdom.

Tinubu has, for a while, been in London for reported medical reasons.

The former Lagos State Governor is rumoured to have undergone a series of surgery on his knee.

There were claims that Tinubu allegedly underwent another knee surgery at the John Hopkins University Hospital in Maryland, the United States.

It was gathered that the former Lagos State Governor returned to the United Kingdom on crutches after undergoing the successful surgery.

On Friday, in the latest photograph, about five Nigerian senators who have Political supporters and godsons of the APC National leader visited him in the United Kingdom.

One of the senators, Adeola, posted the visit on his Facebook, while subtly campaigning for the ailing APC leader to take over the helms of affairs of Nigeria in 2023.

Also, a former Governor of Borno State, Kashim Shettima, member of the House of Representatives, Usman Zanna and former National Legal Adviser of the APC, Dr. Muiz Banire have visited the former governor of Lagos in London to solidarise with him and wished him quick recovery.

The former Ogun State governor, Ibikunle Amosun and the Speaker of the House of Representatives, Femi Gbajabiamila also visited Tinubu.

Just like Buhari, Governor Babajide Sanwo-Olu of Lagos and another member of the House of Representatives, Hon. James Faleke had also visited the former Lagos State governor.