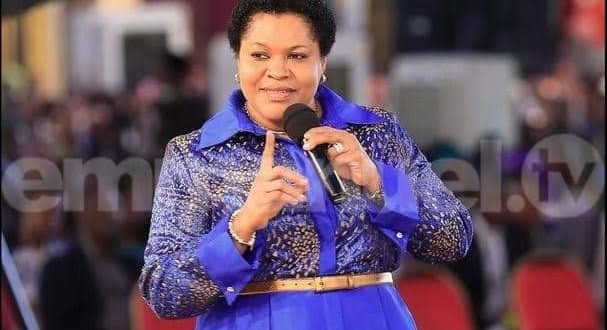 Evelyn Joshua, wife of Late founder of Synagogue Church of All Nations (SCOAN), Prophet Temitope Balogun Joshua has taken over the mantle of leadership of the famous church following a High Court ruling confirming he as Chairperson of the Church’s Board of Trustees.

This development has poured cold water on the boiling issue of succession which has been raging since the Late Prophet passed on on June 5, 2021.

According to a top official of the church, the question of who succeeds Prophet Joshua led to series of sponsored allegations and accusations against the Late Prophet.

No fewer that three women came out with videos of allegations against the Late Prophet.

A man who claims to be the driver of the Late Prophet equally came up with a video hiding his face and stating that all allegations made by the women were true. He even spoke on the succession plans and agenda.

“The emergence of Mama as the new spiritual head of the church has put an end to the unholy plots by some people who are sponsored to destroy the church.

“With this development, God has sifted the wheat from.the chaff. We will now know those who want to serve God among us and those attending the church and getting closer to Late Prophet for leadership purposes,” my source declared..

Speaking after emerging leader of the church, Evelyn Joshua said “I am pleased to address you at this moment upon my appointment as the leader of the SCOAN.

“To all our members, partners, friends, and compatriots of faith, I say Good morning and win today. It has been three months since the glorious home call of our dear father, founder and General overseer, Senior Prophet Temitope Balogun Joshua, which occurred on June 5, 2021.

“These past three months have surely been challenging but we thank you all for remaining strong and for keeping the faith as we have been trained, built, instructed, and taught by God’s servant himself that trails are the soil upon which faith flourishes. We salute your faith.

“Today, like always, is a new dawn in the SCOAN. As we all know Prophet TB Joshua fought his good fight of the kingdom and finished strong to the glory of God. We have now commenced the journey from where our father left the baton.

“He had already prepared us all for this new phase and we must rise up to the occasion as a team under the command of God and the direction of the Holy Spirit.

“This journey is for us all. The SCOAN cannot be without you, all the members, partners and friends of the ministry.

“So, this now serves as a clarion call for you to rise as an army of God as we push this great commission forward.

“I am not your General Overseer. My dear husband and our dear father, the prophet for generations, senior Prophet TB Joshua remains the Founder and General Overseer of the SCOAN.”