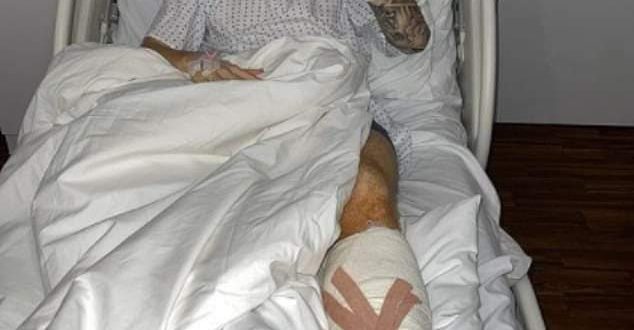 With his foot buried under a thick cast, a smiling Harvey Elliott threw a thumbs-up after the Liverpool star’s successful surgery to set him on the ‘road to recovery.’

The 18-year-old suffered a fracture dislocation of his left ankle in the Reds’ 3-0 win over Leeds on Sunday, and now faces months on the sidelines.

He was operated on in London on Tuesday, and now faces a number of months on the sidelines as he recovers.

When will Elliott be back?
Liverpool, understandably, are placing no specific timeframe on the teenager’s recovery, but Jim Moxon, the club’s doctor, believes Elliott will be fit to resume playing again before the end of the campaign.

He told Liverpool’s official website : “Harvey sustained a fracture dislocation of his left ankle during the game.

“We were able to reduce the dislocation immediately on the pitch and Harvey had surgery today to repair the fracture and ligaments damaged in the incident. The operation was a success so his comeback starts now.

“We won’t put pressure on him by setting a specific timeframe beyond being able to say with confidence we expect him to feature again later in the season following our rehab programme.”

What did Jurgen Klopp say?
Speaking earlier on Tuesday, at a press conference ahead of Liverpool’s Champions League group game with AC Milan, Klopp said Elliott was doing as well as could be expected following such a horrific incident.

“I spoke to him right after the game, he was in the best possible place,” he told reporters. “He had accepted already that he would be out for a while.

“He is in London and will have the surgery today (Tuesday). That is the next step on the way back and we all wait for news on that.”

Elliott himself has thanked Leeds’ medical team, as well as staff at Leeds General Infirmary, for their care following the injury.

He also absolved Struijk of any blame for the challenge, which he described as “a freak accident”.