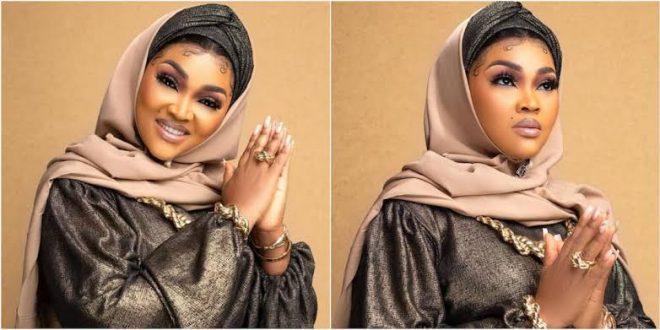 Mercy Aigbe, a Nollywood actress, has allegedly tied the knot with her married lover Kazim Adeoti aka Adekaz, the proprietor of Ibaka TV, in a Muslim wedding ceremony earlier on Sunday.

Mercy Aigbe and Adekaz at their Nikkah
Adekaz, who was previously married with four children, abandoned them in Minnesota, Canada when he began dating Mercy, according to speculations.

Mercy, it was learnt, now goes by the name Hajia Minnah. She confirmed their secret Nikkah, Muslim wedding ceremony by posting a photo from their pre-wedding session on Instagram with the comment “It’s my Boo’s birthday in a bit Cc @kazimadeoti thank you for being awesome.”
Adekaz was said to be a friend to Mercy’s estranged hubby, Lanre Gentry before she was abandoned by the actress after allegations of physical assaults were lodged against him.

Adekaz’s wife and four kids he allegedly abandoned to marry Mercy Aigbe
Insiders say Mercy had been seeing Adekaz while she was married to Gentry. In fact, a reliable source confided in this reporter that the actress’ secret affair contributed to the crash of her marriage to Gentry