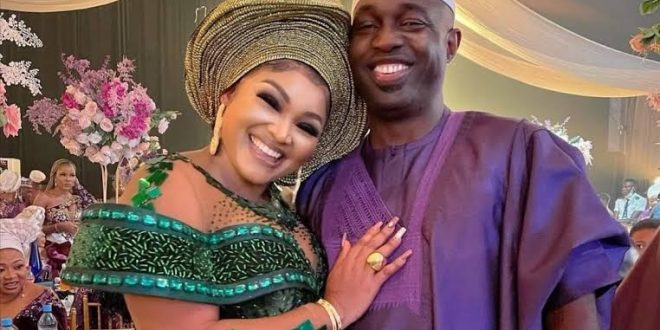 Hollywood actress, Mercy Aigbe called into a live show on TV and disputed her ex-husband’s assertion that he and her new husband, Adekaz are friends

She made this known on Wednesday through a text message sent to the host of a TVC talk show, Morayo Afolabi-Brown, while she was discussing the fall out of her new relationship.

Lanre Gentry while responding to the unveiling of his ex-wife’s new hubby on Sunday, shared a picture of himself, Aigbe, Adeoti, and Adeoti’s wife, Funso on his Instagram page.

He followed the picture up with a post thanking God for unveiling ‘the truth’, insinuating that her relationship with Adekaz is just one of her several escapades while they were married.

He wrote, “At last I thank God the truth is out this is just one out of many to God be the glory.”

Afolabi-Brown and other co-hosts of the TVC show ” Your view ” were discussing the allegation that Mercy Aigbe married her ex-husband’s friend when she called in towards the end of the show.

But her numerous calls suffered some technical hitches, forcing the embattled actress to compose and send in a text message clarifying the issue.

“I just want to clear the impression, Adekaz isn’t Lanre Gentry’s friend,” Afolabi-Brown readout Aigbe’s text to the viewers of the show.

Mercy Aigbe unveiled popular movie marketer, Adeoti, as her new lover on Sunday; she followed that up on Monday with an Instagram post, showering praises on him on his birthday.

The actress married her estranged husband in 2014 and they have 2 kids together, they however separated 3 years later after she alleged that she suffered domestic violence in the marriage.