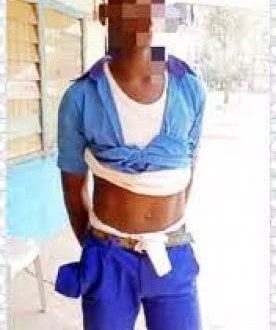 Legal minds as well as Nigerians of hues and cry have been speaking up for that boy.

Caught with charm? When has it become an offence to wear amulet .

“The student has not committed any offence known to law and should not in any way be molested.” a cosmopolitan lawyer affirmed

So what offence has he committed? If it’s Quran or Bible that he tied. Would he be arrested?

Is it a crime? What of if the boy is “ABIKU”. That he has to be with the GBEKUDE. That’s his belief. What of several pastors and alfas that wear the worst. As things are going on around Nigeria now, do you think self defense of any form is not necessary, when the government could not produce any safety of lifes and properties.

That is what he believe in, so far he doesn’t use it to harm people. I have never seen a Muslim arrested for using praying beads, Catholics for using rosary or members of of Winners church for using bishop Oyedepo’s pendant or mantle.

Enough of this sensational stuff.

A pupil of the Alapoti High School, Ado-Odo, Ogun State, was on Tuesday apprehended with an assorted charm around his waist during school hours. . . According to reports, the culprit, identified as Bankole Kamoli, was nabbed inside a forest very close to the school. . . It was gathered that Kamoli stays in the jungle during school hours, to smoke, drink and gamble with some other boys.

Previous Series of celebs’ death in Oyo State worries senator, as Angela dies
Next Consolations pour in for Teslim Folarin