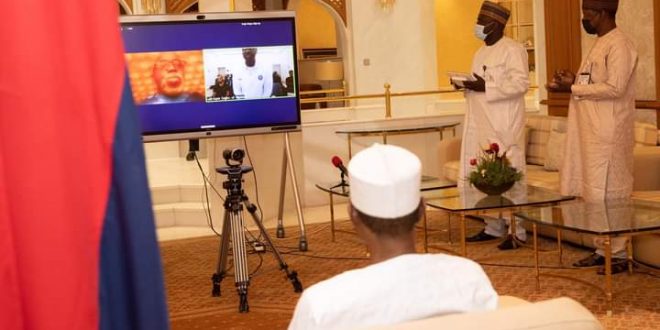 Femi Adesina, Special Adviser to President Buhari on Media and Publicity has said it is silly, idiotic and imbecilic comments, trying to link the loss to the video conference the President.

He said so in his weekly post entitled :﻿﻿﻿LOSING IS PART OF THE GAME

Soccer-loving Nigerians were heartbroken last Sunday when the Super Eagles of Nigeria could not fly higher than the Carthage Eagles of Tunisia in the second round match of the ongoing Africa Cup of Nations (AFCON) tournament holding in Cameroon.

Nigerians were full of expectations. The Super Eagles players were confident. President Muhammadu Buhari had done what the father of the nation should do, engaging in a video conference earlier in the day to ginger the players. Alas, Nigeria lost the game by a lone goal, and exited the tournament.

Nobody likes to lose in a keen contest, whether political, economic, domestic, professional, or in sports. Winning is exhilarating, gives a feel-good sensation, and generally sends the adrenaline pumping. But you know what? Losing is part of the game. Any game, all games. We may comfort ourselves by saying no victor, no vanquished, but the real truth is that somebody loses. A team loses. It is ineluctable.

I follow football a lot, and apart from our local and national teams, I also pay attention to the English Premiership League (EPL), where Manchester City currently leads its closest rival, Liverpool FC by nine points.

In October, Man City had been beaten 2-0 by less fancied Crystal Palace, and right at Etihad Stadium, home base of the league leaders. It was something akin to sacrilege.

Pep Guardiola is possibly the best coach in the world today, and handles Manchester City. When he was interviewed after the Crystal Palace debacle, he just shrugged, and said; “Losing is part of the game.” True.

We want to win at all times. We don’t want to be worsted, or have our nose bloodied at all. But life is not so. You win some, and you lose some. That was what happened to Nigeria last Sunday, though rather painfully.

I have read many silly, idiotic and imbecilic comments, trying to link the loss to the video conference the President had with the players on Sunday morning. Witless. Thoughtless. And incidentally, if the Super Eagles had gone into the match without encouragement from their President, the same people would have come out to condemn the leader of the country for being taciturn and insensitive. Head or tail, you never win with some Nigerians.

There are countries, and football teams, who have established a tradition for being outstanding in soccer. But such teams and countries have lost scandalously before, underscoring the truth that losing is part of the game.

We have talked about Man City and the loss to Crystal Palace. After that week, they went ahead to win the next 12 EPL games, and the fairy tale run did not end till last Saturday, when they played 1-1 away to Southampton FC. You win some, you lose some.

Football can be cruel at times. There can be a humiliation of the brightest and best, but it does not mean the end of the beautiful game. After falling, you get up, dust your pants, and move on, waiting for another day. “It’s not whether you get knocked down, it’s whether you get up,” says renowned American football coach, Vince Lombardi.

Now, see a few checklist of humiliations of great soccer playing teams and nations, and see whether it calls for the otiose politicking, as we saw with some Nigerians earlier this week.

AC Milan and Real Madrid are super powers in football. But at the semi final of the European Cup in 1989, Milan handed a 5-0 trouncing to Madrid.

Argentina is a super power in soccer. But in a 2009 World Cup qualifier, it lost 1-6 to Bolivia. Scandalous!

Brazil, possibly the best soccer playing country in the world, hosted the World Cup in 2014. They had reached the semi final, and were clear favorites to lift the trophy. They met Germany, and got thumped 7-1. Outrageous! Well, losing is part of the game.

Argentina, under the legendary Diego Maradona lost a World Cup game to Germany 4-0. France beat Brazil 3-0 at France ‘98. The old Czechoslovakia trounced Argentina 6-1 before, England slumped to Hungary 3-6 at Wembley Stadium, their home base, while Portugal fell 0-10 to England at Lisbon in 1953. Spain beat Germany 6-0 in 2020. I say it again: losing is part of the game.

One thing was clear from the way the Super Eagles played their firs three matches at AFCON. The German Technical Adviser, Gernot Rohr, should have been fired long ago. He contributed nothing to Nigerian soccer. The team played better under the tutelage of home based Augustine Eguavoen. As the Sports and Youth Development Minister, Sunday Dare, has said, the team “faced the challenge bravely and gave a good account of themselves.”

On those making mischievous political capital out of the loss, the Minister rightly said: “We, as a nation win together, and we lose together. Sports is a unifying factor and those that seek to use it as vectors of division, targeting players with hate speech and making irresponsible statements should rise above such behavior. We are much better than that as a people.”

The best players in the world-Pele, Maradona, Johan Cruyff, Messi, Ronaldo, etc have lost, and still lose matches. Under Muhammadu Buhari as military head of state, we won our first Under 17 global trophy in 1985. In this dispensation, we have won the same trophy twice. So, why do the heathens rage, and the people imagine vain things?

“Winning is not everything-but making the EFFORT to win is,” says Lombardi. Super Eagles made the effort to win, encouraged by their President, but they lost. Sad. But that is how it is, till another day. Losing is an inevitable part of the game.