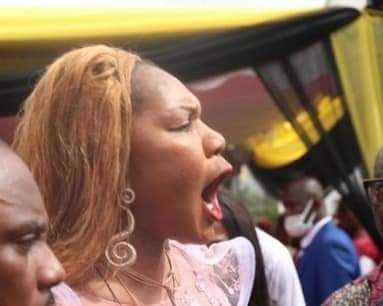 Ambassador Bianca Ojukwu has opened up on the fight incident involving her and Mrs. Ebelechukwu Obiano, wife of Chief Willie Obiano, the immediate past governor of Anambra State.

The fight took place yesterday, Thursday, March 17, during the inauguration of Professor Chukwuma Soludo as the new governor of the state.

Initial reports said it was Mrs. Obiano that first slapped Bianca but the former ambassador and one-time beauty queen confirmed video evidence that it was her who first slapped her when provoked.

Bianca, who spoke about the incident while appearing on Arise TV on Friday, claimed that Mrs. Obiano was drunk and came to abuse her, which prompted her own reaction.

Bianca, wife of late Igbo legend, Dim Chukwuemeka Odumegwu-Ojukwu, said : “I didn’t pay any attention to her arrival. Surprisingly, she then walked towards me and I thought she was coming to greet me. Instead she verbally attacked me with her voice raised, taunting me and asking me what I was there to do, using unprintable, vile language.

“She asked if I had come to celebrate their last day in office but I ignored her completely. Then she kept on aggressively putting her hand on my shoulders and shouting.

“While I ignored her verbal onslaught as advised by people sitting around me, I requested twice that she refrains from touching me with her hands. She proceeded to do so yet again and tried to touch my head and remove my head tie. It was at this point I stood up to defend myself and gave her a dirty slap to stop her from attacking me.

As she made towards me, I then pulled away her wig, she then held on to her wig with her two hands and tried to take the wig away from me.

“The former APGA chairman, Victor Umeh, told her to leave me and told everyone to leave. I was stunned by the stench of whisky in her breath at such an early hour of the day.

“How could the first lady be so drunk at that time? I stayed back to watch the ceremony till the end and left with my dignity intact”.

Bianca Ojukwu has opened up on the fight incident involving her and Mrs. Ebelechukwu Obiano slideshow. news the immediate past governor of Anambra State. wife of Chief Willie Obiano 2022-03-18
Younews Ng
Share

Tags Bianca Ojukwu has opened up on the fight incident involving her and Mrs. Ebelechukwu Obiano slideshow. news the immediate past governor of Anambra State. wife of Chief Willie Obiano