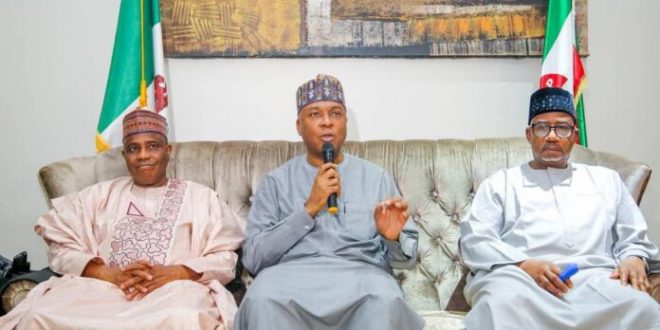 Basking in the euphoria of the successful national convention of his party, the All Progressives Congress (APC), on Saturday, a highly elated President Muhammadu Buhari on Sunday poured cold water on the presidential aspirations of former Vice President Atiku Abubakar, former President of the Senate, Dr. Bukola Saraki, and the Governor of Sokoto State, Aminu Tambuwal.

The trio are all members of the opposition Peoples Democratic Party (PDP).

But they all helped in defeating the then ruling party when they defected to the newly formed APC in 2014 and made Buhari’s presidential ambition a reality in 2015 after three failed attempts.

Atiku, Saraki and Tambuwal, however, went back to the PDP before the 2019 elections and three of them contested the presidential primary election which was won by Atiku.

Three of them have also declared to vie for the party’s presidential ticket for the 2023 elections.

But without mentioning their names, Buhari said it will be unbelievable to consider as trustworthy or acceptable any members of the PDP that left the party but later rejoined to struggle the party’s tickets.

President Buhari also said that the successful conduct of the APC Convention at the weekend has set the scene for the victory of the party in the 2023 general elections.