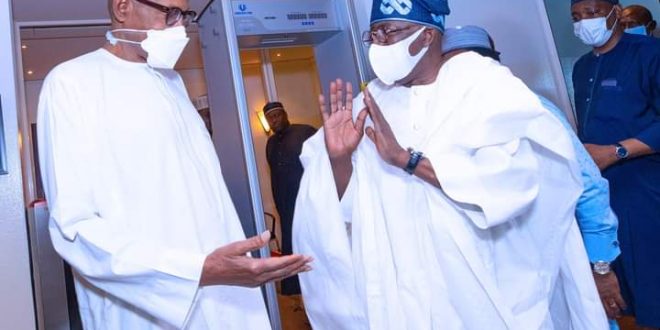 Tinubu visits Buhari in dead of the night !

This was announced by the president’s Special Adviser on Media and Publicity, Femi Adesina, on his Facebook page.

The meeting is believed to be a continuation of previous engagements between the two party stalwarts.

Tinubu was absent from an Iftar dinner hosted in honour of leaders of the All Progressives Congress by the President; as he was in Mecca for lesser Hajj (Umrah).

The presidential hopeful was listed among the 18 APC leaders invited for the meeting with the President on April 26.

He postponed his trip to Taraba state to keep the appointment with the President.

Both leaders met behind closed doors at the Presidential Villa, Abuja.

The agenda of the meeting between the president and Tinubu could not be ascertained as at the time of filing this report.