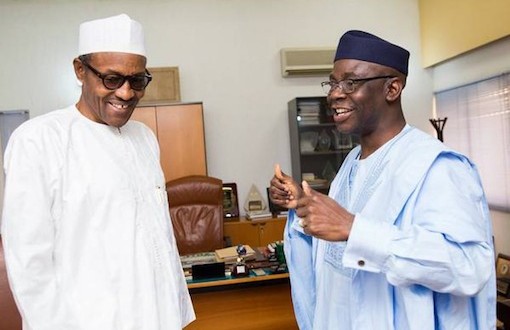 Is Bakare the Buhari’s anointed Candidate ?…Strategies to install him uncovered !

Indications that truly Pastor Tunde Bakare may emerged 16th president of Nigeria has been unearthed.He has been talking prophetically about number 16th.

The establishment is directly involved in the grand, strategically orchestrated plot. We gathered.

Buhari is said to be enamoured with him. And has promised him secretly..with assurances that roads would be cleared for him.

The suspicion is now growing thicker that the plan is to force all candidate to drop their ambition at the last minute.

A clause is already included in the nomination form.

The All Progressives Congress (APC) has ordered the Presidential aspirants to sign a controversial Form 18 ‘Letter of Withdrawal’ attached to the nomination form before allowing them to submit their form.

The APC Form 18 ‘Letter of Withdrawal’ has been attached to the Expression of Interest and Nomination forms sold to all presidential aspirants to fill and submit along with other forms and their credentials.

The withdrawal letter addressed to the National Chairman of the party, Senator Abdulahi Adamu, must also be signed before a Commissioner of Oath/Public Notary before submission

Tagged Form 18, stated: “I hereby voluntarily withdraw my candidacy from the contest. My withdrawal is in the best interest of our great party, the All Progressives Congress.”

It was gathered that some of the aspirants are not comfortable with appending their signatures to the letter, which they consider a bobby trap to force consensus option on them.

A source said, it seems President Buhari’s interest, which is Pastor Tunde Bakare is the reason behind it all.

He concluded by saying ” time will tell”.

Tags Is Bakare the Buhari's anointed Candidate ?…Strategies to install him slideshow. news